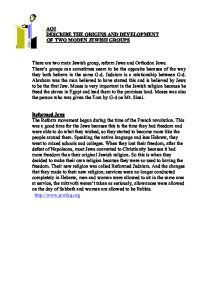 Reformed Jews and Orthodox Jews. Explain how the differing worship and lifestyle of these groups might reflect and assist belief

AO1 DESCRIBE THE ORIGINS AND DEVELOPMENT OF TWO MODEN JEWISH GROUPS There are two main Jewish group, reform Jews and Orthodox Jews. There's groups can sometimes seem to be the opposite because of the way they both believe in the same G-d. Judaism is a relationship between G-d. Abraham was the man believed to have started this and is believed by Jews to be the first Jew. Moses is very important in the Jewish religion because he freed the slaves in Egypt and lead them to the promises land. Moses was also the person who was given the Tora by G-d on Mt. Sinai. Reformed Jews The Reform movement began during the time of the French revolution. This was a good time for the Jews because this is the time they had freedom and were able to do what they wished, so they started to become more like the people around them. Speaking the native language and less Hebrew, they went to mixed schools and colleges. When they lost their freedom, after the defeat of Napoleons, most Jews converted to Christianity because it had more freedom than their original Jewish religion. So this is when they decided to make their own religion because they were so used to having the freedom. ...read more.

The reformed Jews do not believe the commandments as much as they used to but do keep the tradition of following them as best as they can, and followed practices and the culture as best as they could. A03 'Festivals are the best way to learn about your faith' I agree that this is the best way to learn about your faith because they are actually doing the what they need to learn rather than reading about it. In Judaism they have a lot of festivals in their religion, this maybe be because Jew have figured this out that this is the best way that people learn things because it covers a range of different ways of learning. They have learned that doing the activity is the best way. In the festival Sukkot they spend seven days in their Sukkot's that they have made them self's, Sukkot is a hut that has to have more than 3 walls and is only allowed to be build out of things that have fallen to the ground also building a hut is the most obvious way in which Jews celebrate the festival and the most physical. Every Jewish family will build an open air structure in which to live during the holiday. ...read more.

The Oral tradition was in fact a system which allowed the 304,805 letters that are contained in the Torah to expand into a set of legal rulings that covered, building law, agricultural law, criminal law, sexual Law, business law and in fact a complete set of legislation for every conceivable aspect of a society. The form that the Talmud takes is a key set of statements know as the Mishna, which draws its information from the Torah. These statements are then discussed at great length sometimes comparing the information in one Mishna with another and clarifying seeming contradictions. Once the discussions reach a conclusion that becomes the Jewish legal ruling or Halachah. The Talmud also carries background to the stories in the Torah and so the dialogue in Genesis between Rachel and Jacob is expanded upon and a deeper insight gained. After the destruction of the Temple in Jerusalem by the Romans in the year 70, the Talmud needed to be written down. Those who carried it in their minds were being systematically persecuted and killed by Rome. There was a danger that it could become lost and so the oral law too became written. Its' scope is vast and it is contained in twenty huge volumes as thick as a telephone directory and twice the height. www.orthodoxjudasm.com ...read more.