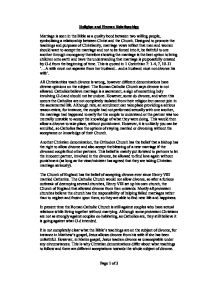 Religion and Human Relationships Marriage is seen in the Bible as a quality bond between two willing people, symbolising a relationship

Religion and Human Relationships Marriage is seen in the Bible as a quality bond between two willing people, symbolising a relationship between Christ and the Church. Designed to promote the teachings and purposes of Christianity, marriage vows reflect that men and women should want to accept the marriage and not to be forced into it, be faithful to one another through monogamy therefore showing the marriage is the best option to bring children onto earth and have the understanding that marriage is purposefully created by G-d from the beginning of time. This is quoted in 1 Corinthian 7: 1-4, 7, 10-11 '...A wife must not separate from her husband...and a husband must not divorce his wife'. All Christianities teach divorce is wrong, however different denominations have diverse opinions on the subject. The Roman Catholic Church says divorce is not allowed. Catholics believe marriage is a sacrament, a sign of something holy involving G-d and should not be undone. However, some do divorce, and when this occurs the Catholics are not completely isolated from their religion but cannot join in the sacramental life. Although rare, an annulment can take place providing a serious reason exists, for instance, the couple had not performed sexually with one another, the marriage had happened to early for the couple to understand or the partner was too mentally unstable to accept the knowledge of what they were doing. ...read more.

In the new testament Paul's letter to the Ephesians, quotes 'Husbands, love your wives, just as Christ loved the Church...' and '...now as the church submits to Christ; so also wives should submit to their husbands in everything...He who loves his wife loves himself'. This shows the actions that should be taken when committing to marriage. Another strong belief within Christianity and marriage is the many views on sexual relationships. Many Christians believe in sex only after marriage. They believe the human body is a symbol of the Holy Spirit and should be respected. Christians might also state that sex was purely designed by G-d to reproduce and strengthen love between a married couple, and any sex outside this idea, spoils the whole idea of making love. However, some say these views are too old-fashioned and a lot has changed over time. They say love is the main message of Christianity and sex is acceptable but only within a stable, committed and loving relationship. The Roman Catholic Church teaches that artificial contraception is wrong and only 'natural methods' should be used to plan families (e.g. making love at times when a women is least fertile). ...read more.

It is evident that time has moved on, one example is now when quoting your vows in marriage. The vow about 'obeying 'has been taken out and it is a personal decision whether or not you wish to say it, whereas years ago it was compulsory for the woman to say this 'obeying' vow to the man when committing her marriage vows. Some Christians say couples should work out a disagreement and care for their child together without the men having more dominant roles or the 'final say' as it is put. These beliefs are exactly what I believe and I think it is true and fair in this world today. The quote 'There is neither Jew nor Greek, slave nor free, male nor female, for you are all one in Christ Jesus.' (Gallatin 8:28) backs up my opinion and although women may have weaknesses so do men and there is no right for a man to take over for he has as many faults as a woman and nothing makes him more special or significant enough for him to have the power to take over, he is as equal to her as she is to him. Anna Meadows Form TN April 2006 ?? ?? ?? ?? Page 1 of 3 ...read more.