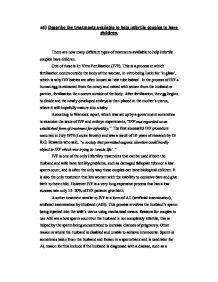 a(i) Describe the treatments available to help infertile couples to have children. There are now many different types of treatments available to help infertile couples have children. One of these is In-Vitro Fertilisation (IVF). This is a process in which fertilisation occurs outside the body of the woman, in-vitro being Latin for 'in glass', which is why IVF babies are often known as 'test tube babies'. In the process of IVF a human egg is extracted from the ovary and mixed with semen from the husband or partner, fertilisation then occurs outside of the body. After fertilisation, the egg begins to divide and the newly developed embryo is then placed in the mother's uterus, where it will hopefully mature into a baby. According to Warnock report, which was set up by a government committee to examine the issue of IVF and embryo experiments, "IVF was regarded as an established form of treatment for infertility." The first successful IVF procedure occurred in July 1978 (Louise Brown) and was a result of 10 years of research by Dr R.G. ...read more.

AID may be used when the husband is sterile or to avoid any hereditary diseases which may be carried by the male (a)(ii) Explain Christian attitudes, and the attitudes of ONE other religion to these treatments Some Christians, such as Roman Catholics, are generally opposed to IVF and other infertility treatments. They believe that a child is a gift from God and that if a person is unable to conceive naturally then they must except that God does not intend for them to have children. A problem Catholics have with, both, IVF and AI is the process by which the sperm is obtained through masturbation, which is considered a sin in the Catholic Church. They, also, disrupt the relationship of marital intercourse and love however some argue that going through infertility treatments is a sign of marital love as it can be difficult and stressful also that the couple are aiming to produce a child that they will love together. Catholics main problems with IVF are the fact that during IVF many eggs are fertilised but only a few are used. ...read more.

Some Christians, Muslims, Jews and Hindus are all against transplant surgery. A reason that Christians, Muslims and Jews have this attitude is that they believe in the sanctity of life; only God has the right to take and create life therefore taking organs from one body to another is a role of God. No human has the right to act like God. In Islam this is known as Shirk and is a great sin. All the religions are against trading organs, as the poor may be tempted to sell their organs to the rich and this could seen as exploitation, which is banned in the Bible, Torah and Tenakh. Hindus also believe in ahimsa (non violence). Transplant surgery is violent towards the donor. It also breaks the law of Karma; a person may be suffering from a bad heart because of previous bad deeds this should not be avoided by having a transplant. Most of the religions believe that organs are made specifically for people by God and therefore should not be removed from that person's body. Jews, in particular, believe it may affect a person's Jewishness. They also believe that because transplants are very expensive that money could be better used to help many people rather than just a small number. ...read more.