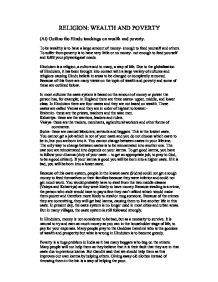 (Ai) Outline the Hindu teachings on wealth and poverty.

Hinduism is a religion, a culture and to many, a way of life. Due to the globalisation of Hinduism, it has been brought into contact with a large variety of cultures and religions causing Hindu beliefs in areas to be changed or completely removed. Because of this there are many views on the topic of wealth and poverty and some of these are outlined below.

In most cultures the caste system is based on the amount of money or power the person has, for example; in England there are three castes- upper, middle, and lower class. In Hinduism there are four castes and they are not based on wealth. These castes are called Varnas and they are in order of highest to lowest:-

Brahmin- these are the priests, teachers and the wise men.

Sudra- these are manual labourers, servants and beggars. This is the lowest caste.

You cannot get a job which is not of your caste and you do not choose which caste to be in, but you are born into it. You cannot change between castes in your lifetime. The only way to change between castes is to be reincarnated into another one. The cast you are reincarnated into depends on your karma. To get good karma, you have to follow your dharma (duty of your caste – to get an appropriate job, to pray to God, to be a good citizen). If your karma is good you will be born into a higher caste. If it is bad, you will be born into a lower caste.

Because of this caste system, people in the lowest caste (Sudra) could not get enough money to feed themselves or their families because they were inferior and could not get much work. You would probably have to steal from the two middle classes (Vaisya and Kshatriya) as they were likely to have money. Because stealing is a crime, the person who stole would have to pay a fine they can’t afford which would make them poorer and therefore more likely to steal or mug someone. Because of the crimes they are committing, they will get bad karma, causing them to live another life in this caste. In present day, the caste system is no longer used in most cities and urban areas. But in many villages, the caste system is still followed strongly.

In Hinduism, money is not considered to be bad, but as a necessity to survive. It is natural to try and earn as much money as you can in the householder stage of life, to pay for your expenses. Many people pray to the Goddess Laxshmi who is the goddess of wealth and prosperity but what is wrong in Hinduism is to become greedy.

Poverty is a huge problem in India as it has many beggars who beg on the streets. Many people will not help them as they believe that it is their fault that they are in that caste due to previous karma. But Gandhi said that we should help them as this improves our own karma by helping others. Giving away old clothes instead of throwing them in the bin is a way of helping the poor.

(Aii) Explain why there is a need for world development.

The world’s countries can be separated into three main categories;

Most of the developed countries are- the USA, Canada, western European countries and Australia. These countries are richer and have more advanced technology. They do not have a poverty problem and if there is, it would probably be relative poverty.

The undeveloped countries can be referred to as ‘third world countries’. Most of these are in Africa and Asia. They have huge poverty problems- a mixture of both absolute and relative poverty. Relative poverty is when someone is considered to be poor compared to others in their community. Absolute poverty is when the person cannot afford to buy enough food or shelter for himself or his family.

As the countries which have mass poverty problems are very poor, they would borrow money from richer countries such as the USA. This would put the country into debt which would create a large amount of interest as money is usually borrowed in millions or billions. One example is when Chile borrowed 3.9 billion dollars, and then ended up paying back a total of 12.8 billion dollars due to interest. That extra 9 billion dollars could have been used to speed up the development of the country.

Because of this huge interest problem governments try to make enough money so they can pay of the debt as quickly as possible otherwise it will keep collecting up interest. One way to do this is to grow cash crops. Cash crops are crops grown to be sold rather than food for the people. The richer countries who buy them often buy them at a lower price than the actual value because the countries are desperate to sell them. Some examples of cash crops are- coffee, cocoa, tobacco, sugar cane and cotton. Due to this many people starve as there is not enough food, so the country ends up borrowing again to pay for the importing of food.

Also natural disasters can cause the destruction of houses, farmland, hospitals, schools and businesses. This would mean that the government would have to take out more debts to make repairs and to help the injured. Because of the disaster, the roads may not be safe to travel on so the government would have to use expensive transport such as helicopters in times of emergency.

(Aiii) Analyse and explain the work of ONE Hindu agency working for world development.

The Hindu agency which I will be talking about is BAPS Care International. BAPS Care International is a charity which became registered in the year 2000. it was previously set up 1950 and done charity work under the BAPS Swaminarayan Sanstha. Their mission is to help disadvantaged families and communities mainly in India and they believe that everyone has the right to have a ‘peaceful, dignified and healthy way

They offer many services such as medical, educational, environmental, tribal, community services and disaster relief.

BAPS Care International has achieved so much in these past years and here is a list of some of their greatest achievements.

Also since the 1970s they have given disaster relief for floods, famines, cyclones, plagues, droughts, ferry disasters, riots, earthquakes and the tsunami.

(B) ‘There should be no rich people as long as there is poverty in the world’.