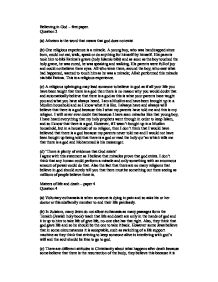 Believing in God - first paper. Question 2 (a) Atheism is the word that means that god does not exist (b) One religious experience is a miracle. A young boy, who was handicapped since born, could not eat, walk, speak or do anything for himself by himself. His parents took him to bibi Fatima's grave (holy Islamic bibi) and as soon as the boy touched the holy grave, he was cured, he was speaking and walking. His parents were full of joy and could not believe there eyes. All who were there, around the boy, who saw what had happened, wanted to touch him as he was a miracle; Allah performed this miracle via bibi Fatima. This is a religious experience. (c) A religious upbringing may lead someone to believe in god as if all your life you have been taught that there is a god then there is no reason why you would doubt that and automatically believe that there is a god as this is what your parents have taught you and what you have always heard. I am a Muslim and have been brought up in a Muslim household and so I know what it is like. I always have and always will believe that there is a god because this I what my parents have told me and this is my religion. ...read more.

However many believe in the immortality of the soul. This is because, Jesus said the criminal on the cross would be in paradise straight after death, the communion of saints teaches that living and dead Christians can communicate with each other and things like near-death experiences when people say there soul has left there body and gone down a tunnel of light to god show the immortality of the soul. Christian believes that life after death may be different, but all Christians believe in life after death and this gives their lives purpose and meaning. (d) 'Every woman should have a right to an abortion if she wants one' I agree with this as if the woman was raped and got pregnant, I don't think it fair for her to keep that baby as a constant reminder of what happened to her. Also, if a 16 year old girl has a one night stand and as a result of this gets pregnant, I don't think it is fair on the child to bring it in to the world when the mother can't support it, and may not want it so doesn't really love it. This gives the child an unfair disadvantage before it has even come into the world. Marriage and family life - paper 2 Question 5 (a) An extended family is aunts/uncles/grandparents living with the mother, father and children or living close with lots of contact.. ...read more.

(b) Christian teachings on racial harmony are that all forms of racism is wrong and that Christians should make more racial harmony. This is because, Jesus treated people of different races equally, St peter had a vision form god telling him that god has no favourites among the races, god created all races in his image and all Christian churches have members, ministers and priests of all races and colours. (c) Trying to convert someone may cause problems in a multi-faith society because this may seen as being discrimination towards the other religions, as if to say we are better and more inferior and superior then you so they should come in our religion as our religion is the right religion. Also by doing this other religions may feel threatened that our followers are going into other religions causing them to feel unequal and feeling they have to retaliate by doing something that the other religion then feels discriminated against. (d) 'A man's place is in the home' I do not agree with this as I personally feel that it should be the man who is out working in order to put food on the table and the woman should work or then stay at home and do the housework as well as look after the kids. I don't think that the man should be the one who to be at home and doing the housework and the cooking but should be the one who makes that happen by going out and earning the money for his family. ...read more.