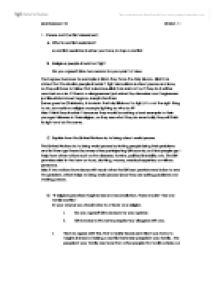 1- Peace and Conflict Assessment: A. What is conflict resolution? A conflict resolution is when you have to stop a conflict. B. Religious people should not fight. Do you agree? Give two reasons for your point of view. Yes I agree, because for example in Islam they have the Holy Quran, Allah has stated that the Muslim people shouldn't fight since Islam is about peace and love, so they will have to follow that rule since Allah has said not to, if they do it will be counted as a sin. If there's a disagreement just solve it by discussion and forgiveness just like Mohammed forgave Josephs brothers Same goes for Christianity, it states in the Holy Bible not to fight, it's not the right thing to do, so mostly no religion accepts fighting so why do it? Also I think they shouldn't because they would be setting a bad example to their younger followers in their religion, as they see what they do eventually they will think its right and do the same. ...read more.

Also they would say not all Muslims think about forgiveness, some think it's right to seek revenge and hurt their family member. 2 - A. What is meant by forgiveness? Forgetting someone's mistake and accepting them back as a friend or family member. B. Religions cause conflicts in families. Do you agree? Give two reasons for your point of view Yes I agree with this, because they mostly cause arguments between families, for example, a Christian family, might have a member which doesn't want to be a Christian, that might be because since the member has learnt about different religions at school or maybe on the internet or their friends. He might be interested in the new religions he's learnt about and believes he can obey the rules of the other religion easier than Christianity. When he informs he's parents about the change he wants to do, wanting to change his religion, the parent's reactions would be being very shocked and angry because they have brought him up to be a Christian but now he decides to become part of a different religion. ...read more.

D. Religions should be able to solve the problem of bullying. In your answers you should refer to at least one religion. i. Do you agree? Give reasons for your opinion. ii. Give reasons why some people may disagree with you. i. Yes I agree with this point because most religions teaches peace like in Islam, by peace they meaning taking care, respecting, being nice to everyone, so it wouldn't be right to hurt another person because god has said we are all equal and should treat each other in a good way. That's what Islam's main point is, it teaches to be nice to your other human beings instead of hurting them. ii. People would disagree with me because they could say that the other person might not be religious (the bully) and he might not have learned anything about peace and love, so the bullying would still take place. They might also say, the person might be religious but he/she don't follow their religion so they wouldn't treat everyone equal and nice, instead being bad towards them. ?? ?? ?? ?? Mati Saidzai 11R 20 Oct. 11 ...read more.