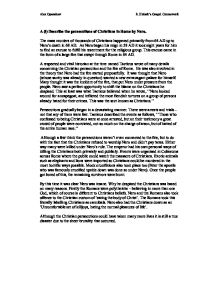 A (i) Describe the persecutions of Christians in Rome by Nero. The mass murders of thousands of Christians happened primarily from 64 AD up to Nero's death in 68 AD. As Nero began his reign in 58 AD it took eight years for him to find an excuse to fulfil his resentment for the religious group. This excuse came in the form of a large fire that swept through Rome in 64 AD. A respected and vital historian at the time named Tacticus wrote of many details concerning the Christian persecution and the fire of Rome. He was also involved in the theory that Nero had the fire started purposefully. It was thought that Nero (whose sanity was already in question) wanted a new extravagant palace for himself. Many thought it was the incident of the fire, that put Nero under pressure from the people. Nero saw a perfect opportunity to shift the blame on the Christians he despised. This at least was what Tacticus believed when he wrote, ''Nero looked around for a scapegoat, and inflicted the most fiendish tortures on a group of persons already hated for their crimes. This was the sect known as Christians.'' Persecutions gradually began in a devastating manner. ...read more.

When first looking at this question Christian persecutions aren't seen as a common occurrence in today's world. There are persecutions of Christians just not on the same scale that was seen around the time of Jesus. Most severe persecution gets little recognition and is kept from the public nowadays. However quite severe persecutions take place in much of South East Asia, Sudan and Iraq. Even closer to home in Northern Ireland Christians have turned on Christians in a Catholic v Protestant battle where may lives have been lost and tension are only starting to go down. Even though the perfect solution would be to stop all persecutions around the world, it is a very far off solution. One near convenient factor however is that Marks gospel is thought to have been written for Christians facing persecution. One thing that might help Christians facing persecution is the fact that even though Jesus was the Son of God, he was still a human being. He was bound to go through all the emotions of a person as demonstrated in the gospel. Examples of this can be seen in 11:15 'Jesus clears the temple'. Here he shows anger at the fact the temple - the house of God has been turned into a market place. ...read more.

Bearing this in mind Christians should be laying down their lives for Jesus. But again this comes down to actually having the chance to do so and even whether or not you 'love' Jesus enough in the first place. Throughout the gospel there are vivid teachings of what Christians are to do. However not many of these teachings are taken in a literal sense. There is a lot of talk of taking up our cross and following Jesus, but this is rarely something many Christians would think about before dying. In conclusion to the question there are many good reasons why Christians aren't prepared to suffer as Jesus did. It can be seen however that these reasons may be used as a scapegoat but is it really a case of we aren't religious enough anymore. Religion aside, times have changed since the time of Jesus. The numbers attending church are slowly dwindling because there are more important even greater things to do. For me personally I wouldn't want to suffer for Christianity, I certainly wouldn't want to be persecuted for being a Christian and neither would many others. Overall it's just about how the individual feels and how willing they are to go as far as to suffer for their faith. Many do and will continue to do so over time. Alex Openshaw R.E Mark's Gospel Coursework ...read more.