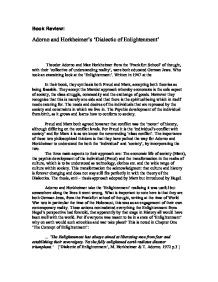 Review of Adorno and Horkheimer's The dialectic of enlightenment

Book Review: Adorno and Horkheimer's 'Dialectic of Enlightenment' Theodor Adorno and Max Horkheimer from the 'Frankfurt School' of thought, with their 'collective of understanding reality', were both educated German Jews. Who took an examining look at the 'Enlightenment'. Written in 1947 at the In their book, they synthesis both Freud and Marx, accepting both theories as being feasable. They accept the Marxist approach whereby economics is the sole aspect of society, the class struggle, commodity and the exchange of goods. However they recognise that this is merely one side and that there is the spiritual being which in itself needs catering for. The needs and desires of the individuals that are repressed by the society and constraints in which we live in. The Psychic development of the individual from birth, as it grows and learns how to conform to society. Freud and Marx both agreed however that conflict was the 'motor' of history, although differing on the conflict levels. For Freud it is the 'individual's conflict with society' and for Marx it is as we know the neverending 'class conflict'. The importance of these two philosophical thinkers is that they have pathed the way for Adorno and Horkheimer to understand the both the 'individual' and 'society', by incorporating the two. ...read more.

Freud believed that there were high levels of conformity which existed, and the more conformity that existed lead to more exclusion, and eventually those that did not conform were seen as a 'threat'. Adorno and Horkheimer developed a wider, and more pessimistic concept of enlightenment. In their analysis enlightenment had its dark side: while trying to abolish superstition and myths by 'foundationalist' philosophy, it ignored its own 'mythical' basis. Its strivings towards totality and certainty led to an increasing instrumentalization of reason. In their view the enlightenment itself should be enlightened and not posed as a 'myth-free' view of the world. Enlightnement is a 'process of engagement', this engagement with a 'temporary' reality, a reality that is forever changing and therefore the need for philosopher's should be constantly changing. Core theories of Hegel and Marx are relevant and do find their places in history however there is a need to adapt these theories for the relevant times in history. This is the complexity of contemporary reality, we may understand Hegel, then we may lose this comprehension due to changes in time. .....'That arid wisdom that holds there is nothing new under the sun, because all the pieces in the meaningless game have been played, and all the great thoughts have already been thought, and because all possible discoveries can be construed in advance' ['Dialectic of Enlightenment', M. Horkheimer & T. Adorno. Trans. By John Cumming 1972 p.12] Nothing new, all seen before ...read more.