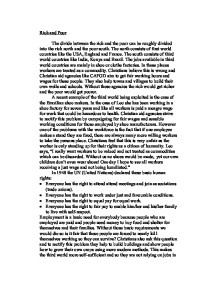 Rich and Poor The divide between the rich and the poor can be roughly divided into the rich north and the poor south. The north consists of first world countries like the USA, England and France. The south consists of third world countries like India, Kenya and Brazil. The jobs available in third world countries are mainly in shoe or clothe factories. In these places workers are treated as a commodity. Christians believe this is wrong and Christian aid agencies like CAFOD aim to get fair working hours and wages for these people. They also help towns and villages to build their own wells and schools. Without these agencies the rich would get richer and the poor would get poorer. A recent example of the third world being exploited is the case of the Brazilian shoe makers. In the case of Leo she has been working in a shoe factory for seven years and like all workers is paid a meagre wage for work that could be hazardous to health. Christian aid agencies strive to rectify this problem by campaigning for fair wages and sensible working conditions for those employed by shoe manufacturers. ...read more.

The factory managers by destroying people from the inside out are effectively destroying a part of God that should be treated with respect like God intended for all his creations. In the Bible we are taught that to enter in to eternal life we must sell all we have and give everything to the poor. All these rich factory owners are giving the poor is inadequate wages and health problems, whether physical or emotional. These workers are being enslaved virtually because they can't do anything about it. The Bible tells us that all people are equal in the eyes of God however some are choosing to ignore this and are ignoring the needs of the poor. In the story of the rich man and Lazarus we are told that the rich man went to Hell because he did not help the poor. He didn't go to Hell because he treated Lazarus badly but because he ignored his needs as a human being. Christians are taught that they should help those less fortunate and those in distress because it is the right thing to do and otherwise they will go to Hell. ...read more.

Jesus never resorted to violence and even taught that fighting was wrong. Christians realise this and do not fight against the government physically but instead use words and peaceful protests to make themselves heard and understood. However this isn't always enough in the modern world and some Christians ignore the teachings and use violence instead but only as a last resort. These people are known by some as terrorists, by others as freedom fighters it depends on whom they're fighting. Some Christians are members of organisations such as CAFOD 'Christian Agency For Overseas Development.' Organisations such as these rely on the support of people in general, not just Christians to donate money. CAFOD has many campaigns for fair trading and equal rights. CAFOD has a game called 'Trading Trainers.' By playing this game people are encouraged to think about how much money hard workers in the third world are being cheated out of. By doing this CAFOD encourages us to take a more active part in campaigning for fair pay. CAFOD also pesters big companies to sell products at a price that will give the workers a fair wage and encourages manufacturers to adopt 'codes of conduct' which will improve working conditions and Christians state of mind. ?? ?? ?? ?? ...read more.