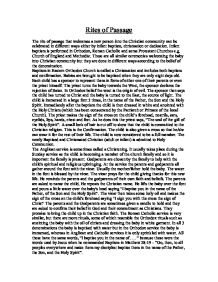 Rites of Passage The rite of passage that welcomes a new person into the Christian community can be celebrated in different ways either by infant baptism, chrismation or dedication. Infant baptism is performed in Orthodox, Roman Catholic and some Protestant Churches e.g. Church of England and Methodist. These are all similar ceremonies welcoming the baby into Christian community but they are done in different ways according to the belief of the denomination. Baptism in Eastern Orthodox Church is called a Chrismation and includes both baptism and confirmation. Babies are brought to be baptised when they are only eight days old. Each child has a sponsor to represent them in form of either one of their parents or even the priest himself. The priest turns the baby towards the West, the sponsor declares the rejection of Satan. In Orthodox belief the west is the origin of evil. The sponsor then says the child has turned to Christ and the baby is turned to the East, the source of light. The child is immersed in a large font 3 times, in the name of the Father, the Son and the Holy Spirit. Immediately after the baptism the child is then dressed in white and anointed with the Holy Chrism (which has been consecrated by the Patriarch or Primate of the local Church). ...read more.

In all 3 denominations the baby is baptised with water but in the Orthodox service the baby is immersed, whereas in Anglican and Catholic services it is only sprinkled with water. All these have the same words, "I baptise you in the name of . . . " because these were the words used by Jesus when he commanded Baptism in Matthew 28:19 - "Go, then, to all peoples everywhere and make them my disciples: baptise them in the name of the Father, the Son, and the Holy Spirit". Some churches (Methodist) have a simple dedication service which celebrates the birth of the baby and the infant is given a Christian name but not baptised. The parents promised to bring the child up in the Christian faith. Later on when they are old enough to make a commitment for themselves the child may be baptised. Roman Catholic and Anglican believers see water as a symbol of life because without water there will be no life. Water also makes us clean. Baptism signifies the new life and the cleansing from sin won for us by the resurrection of Jesus. Many Catholic and Anglican churches anoint the child with chrism oil which shows that the Holy Spirit has come to the child and began to work on him/her and help the baby in life. ...read more.

The locks of hair that are cut off in the sign of the cross show that the babies now belong to Christ, and this is their first sacrifice. Baptism, to the baby, will be one of the most important times of their life, as it is at that time that it seeked help from God and is guided now by his/her belief towards good. The baby's parents have made it possible for that child to make the first step in to the church and be in one with God. It is also an opportunity for the parents to dedicate their child to God, to thank Him for it and promise to bring up the child as a practicing Christian. The baby is now part of the Holy Community, too. Most Christians believe that when an action of Baptism is performed God's Spirit awakens in their lives. This inward change means that the person is now more sensitive towards God and is more likely to hear His call or feel His presence. However other Christians e.g. Free church Christians such as Methodists don't believe that baptism is a sacrament. They believe it is just a symbol or a sign that people have changed inside, because they are committing their lives to Christ. They believe that baptism is just done in obedience to Jesus' command in Matthew 28:19 and they are simply following it. "Christian rites of passage should be reserved for believers only" ...read more.