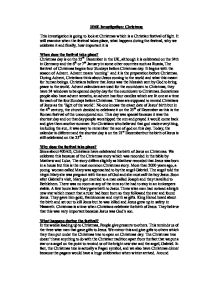 RME Investigation: Christmas This investigation is going to look at Christmas which is a Christian festival of light. It will examine when the festival takes place, what happens during the festival, why we celebrate it and finally, how important it is When does the festival take place? Christmas day is on the 25th December in the UK, although it is celebrated on the 24th in Germany and the 6th or 7th January in some other countries such as Russia, The festival of Christmas begins four Sundays before Christmas day. It begins with the season of Advent. Advent means 'coming' and it is the preparation before Christmas. During Advent, Christians think about Jesus coming to the world and what this meant for human beings. Christians believe that Jesus was the Messiah sent by God to bring peace to the world. Advent calendars are used for the countdown to Christmas, they have 24 windows to be opened day by day for the countdown to Christmas. Sometimes people also have advent wreaths, an advent has four candles which are lit one at a time for each of the four Sundays before Christmas. ...read more.

More than 2000 years ago, a young woman called Mary was approached to by the angel Gabriel. The angel told the virgin Mary she was pregnant with the son of God and she must call the boy Jesus. Soon after Gabriel's visit, Mary got married to a man called Joseph and they travelled to Bethlehem. There was no room at any of the inns so the had to stay in an innkeepers stable. A few hours later Mary gave birth to Jesus. Three wise men had noticed a bright new star which meant that a ruler had been born so they followed the star and found Jesus. They gave him gold, frankincense and myrrh as gifts. King Herod heard about the birth and set out to kill Jesus but he was killed and Jesus grew up in safety in Nazareth. Christmas is a time when Christians celebrate the birth of Jesus. They believe that this was very important because Jesus was God's son. What happens during the festival? ...read more.

How Important is the festival? Christmas is the second most important festival of the Christian year, after Easter. In early Christianity, Easter was the central Christian festival and it wasn't until around 400 years after Christ's Birth that Christmas became an official Christian festival. Before that, Christ's birth wasn't really recognised and it took a while for this tradition to take hold so Easter was much more recognised, even today Easter is considered more important than Christmas. Before Christmas, many people already celebrated the end of the winter month with feasts and decorations. The early church modified this celebration and as at that time of the year the days started going longer again and the sun came out, there became an opportunity to celebrate Christ's birthday as 'the Light of the World'. Christmas is a Christian fesival of light. It takes place on 25th December. People celebrate this because Of the birth of Jesus. During the festival people give gifts, sing carols, spend time with their families and celebrate Jesus's Birth. It is important to the religion because it is a time of giving and celebration. ...read more.