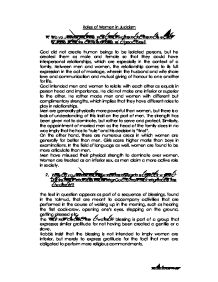 Roles Of Women In Judaism

Roles of Women in Judaism 1. Do you think that the idea that women and men are equal but should have different roles is a good one? God did not create human beings to be isolated persons, but he created them as male and female so that they could have interpersonal relationships, which are especially in the context of a family. Between men and women, the relationship comes to its full expression in the act of marriage, wherein the husband and wife share love and communication and mutual giving of honour to one another for life. God intended men and women to relate with each other as equals in person hood and importance. He did not make one inferior or superior to the other. ...read more.

2. Why do you think that Jewish men begin each day with a prayer that includes thanking God for not 'having made me a woman'? The text in question appears as part of a sequence of blessings, found in the Talmud, that are meant to accompany activities that are performed in the course of waking up in the morning, such as hearing the first cock-crow, opening one's eyes, stepping on the ground, getting dressed etc. The "has not created me a woman" blessing is part of a group that expresses similar gratitude for not having been created a gentile or a slave. Rabbis insist that the blessing is not intended to imply women are inferior, but merely to express gratitude for the fact that men are obligated to perform more religious commandments. ...read more.

In Judaism, unlike Christianity, God has never been viewed as exclusively male or masculine. Judaism has always maintained that G-d has both masculine and feminine qualities. God has no body; therefore the idea that God is male or female is absurd. We refer to God using masculine terms simply for convenience's sake. Both man and woman were created in the image of God. According to most Jewish scholars, "man" was created in Gen. 1:27 with dual gender, and was later separated into male and female. According to traditional Judaism, women have a greater degree of intuition, understanding and intelligence than men. The rabbis came to this conclusion from the fact that woman was "built" rather than "formed". It has been said that the matriarchs (Sarah, Rebecca, Rachel and Leah) were superior to the patriarchs (Abraham, Isaac and Jacob). Women did not participate in the idolatry regarding the Golden Calf. ?? ?? ?? ?? Jordan Hall 11EU ...read more.