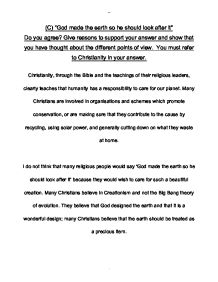 (C) "God made the earth so he should look after it" Do you agree? Give reasons to support your answer and show that you have thought about the different points of view. You must refer to Christianity in your answer. Christianity, through the Bible and the teachings of their religious leaders, clearly teaches that humanity has a responsibility to care for our planet. Many Christians are involved in organisations and schemes which promote conservation, or are making sure that they contribute to the cause by recycling, using solar power, and generally cutting down on what they waste at home. I do not think that many religious people would say 'God made the earth so he should look after it' because they would wish to care for such a beautiful creation. Many Christians believe in Creationism and not the Big Bang theory of evolution. They believe that God designed the earth and that it is a wonderful design; many Christians believe that the earth should be treated as a precious item. ...read more.

This could come across as a good thing at first glance, but many of these people are being paid ridiculously small amounts of money for manufacturing products that are being sold elsewhere for hundreds of pounds each. In this way, these companies are taking advantage of the less fortunate people in the world in order to make a larger profit for themselves. Christians believe that the very first law given to humanity, as soon as the first human was created in the image of God, was that they should be 'stewards' of the earth. A steward is someone who carefully looks after something that is not theirs; they look after it to the best of their ability for its owner, who in this case is God. Some have interpreted the Creation story as giving people the right to exploit the environment, but most Christians would disagree with this, as they believe that in Genesis 1 and 2 rights are balanced against responsibilities; they believe that they are in ...read more.

Remember that you were slaves in Egypt. That is why I command you to do this..." (Deuteronomy 24: 19-22) The law reminds people not to insist on taking every last scrap for themselves; they should make sure that they leave something behind for the people who will come after them. Personally, I strongly believe that if God exists and he did create the world, then it is still Man's responsibility because he left it in our charge. I think Genesis 1:26-31 proves that God gave the earth to the human race as a responsibility and not a right. Also, I believe that all of human kind has a responsibility to take care of itself and all of those concerning it, and by helping to conserve the environment we are keeping the world a beautiful and healthy place for future generations to live in and care for. ?? ?? ?? ?? Alex Mullan - Y11 - Religious Studies Coursework - Religion and Science Page 1 of 3 ...read more.