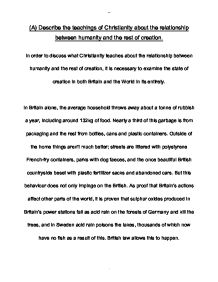 (A) Describe the teachings of Christianity about the relationship between humanity and the rest of creation. In order to discuss what Christianity teaches about the relationship between humanity and the rest of creation, it is necessary to examine the state of creation in both Britain and the World in its entirety. In Britain alone, the average household throws away about a tonne of rubbish a year, including around 132kg of food. Nearly a third of this garbage is from packaging and the rest from bottles, cans and plastic containers. Outside of the home things aren't much better; streets are littered with polystyrene French-fry containers, parks with dog faeces, and the once beautiful British countryside beset with plastic fertilizer sacks and abandoned cars. But this behaviour does not only impinge on the British. As proof that Britain's actions affect other parts of the world, it is proven that sulphur oxides produced in Britain's power stations fall as acid rain on the forests of Germany and kill the trees, and in Sweden acid rain poisons the lakes, thousands of which now have no fish as a result of this. ...read more.

If the present rate of emission continues, concentrations with have doubled within 60 years. This could trigger the destruction of the ozone layer, which shields the Earth from the harmful effects of the Sun's ultra-violet rays. If this happens it could cause a 'hot house' effect, increasing temperatures by two or three degrees, enough to melt the Artic and the Antarctic ice caps, raising sea levels and flooding all low-lying areas. Another way to show humanity's bad effect on the Earth is the amount of radioactive waste that is very hard to dispose of, produced by the Nuclear Power Industries all over the globe. Some of it will stay radioactive for years, whereas other less radioactive waste is dumped at sea. All of it has to be transported, and future generations will have to deal with it. Human error and incompetence concerning this issue has already caused big problems: the nuclear disaster at Chernobyl in 1985 released a radioactive cloud over northern Europe and has left much of the area surrounding the power plant uninhabitable. It can be seen, therefore, that despite Christian teachings on humanity's responsibility for the planet, the world is facing huge problems. ...read more.

A steward is someone who carefully looks after something that is not theirs, and they look after it to the best of their ability for its real owner. Some have interpreted the creation story as giving people the right to exploit the environment. Most Christians would disagree with this, as in the bible God gives specific instructions about what people would now regard as responsible environmental stewardship, for example:- 'For six years you are to sow your fields and harvest the crops, but during the seventh year let the land lie unplowed and unused. Then the poor among your people may get food from it, and the wild animals may eat what they leave. Do the same with your vineyard and your olive grove.' (Exodus 23:10-11) Many Christians believe that, even if they were not directly told to look after the earth by God, they would still want to do it because it is the Christian thing to do. It would be helping others, both in the present and the future, and also it would be showing selflessness. ?? ?? ?? ?? Alex Mullan - Y11 - Religious Studies Coursework - Religion and Science Page 1 of 4 ...read more.