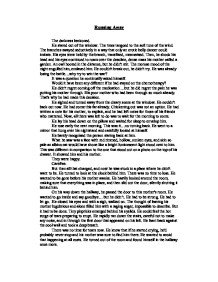 Running Away The darkness beckoned. He stared out of the window. The trees tangoed to the soft tune of the wind. The branches swayed seductively in a way that only an erotic belly dancer could imitate. His eyes were held by the branch, transfixed, mesmerised. Then, he shook his head and his eyes continued to roam over the desolate, dense mass his mother called a garden. An owl hooted in the distance, but he didn't stir. The morose mood of the night engulfed him, enslaved him. He couldn't break out, he didn't try. He was already losing the battle...why try to win the war? It was a question he continually asked himself. Would it have been any different if he had stayed on the chemotherapy? He didn't regret coming off the medication ...but he did regret the pain he was putting his mother through. His poor mother who had been through so much already. That's why he had made this decision. He sighed and turned away from the dreary scene at the window. He couldn't back out now. He had come this far already. Chickening out was not an option. He had written a note for his mother, to explain, and he had left notes for those of his friends who mattered. ...read more.

All he remembered was his mother and how terribly upset she was. She took some solace in the fact that the operation could help permanently get rid of the tumour. But it never did. It just came back, bigger and more powerful than before, but this time, there was no chance of it going away. That was why he was doing this. If the tumour wasn't going to go away, then he would have to. It wasn't an easy decision to make. He had to think of everyone else his decision was going to affect. His mother, his friends...his girlfriend. Only his mother knew what he was going through. No one else. It was probably his fault. He didn't open up to them, but he couldn't help that. How was he supposed to tell the people who cared about him that it was only a matter of months before he died? His friends knew something was wrong, but they never asked. He resented that. His girlfriend had asked many times, but he had always shrugged it off, blaming it on stress. So whose fault was it? His or theirs? He never told them because they never asked, but when they did, he lied. ...read more.

He was here now. This was it. He cautiously strode towards the edge of the cliff and looked out at the world beyond him. The sight was breathtaking. All he could see for miles and miles was the sapphire blue of the sea. It glistened and glinted against the backdrop of the early morning sun. It had never looked more welcoming as it did now. Seagulls squawked above him and the grass swayed around his feet. This was exactly how he imagined it. He had planned it out so many times in his head, but he never thought he would get this far. Now, he could leave it all behind. The tumour, the mess, the confusion. He heard a church bell ring in the distance. His mother would be waking soon. He had to do this now. He took a few steps back. He wasn't scared...or at least he didn't think he was. He had a funny feeling in his stomach, but he supposed that was because he knew that this was it. This was the end. He looked around him. Everything was peaceful and serene. It gave him a sense of calm. It was just how the world should be. No diseases. No drugs. No homelessness. No poverty. Just peace. He ran forward, using as much energy as he could muster...and jumped. Was there a God? He was about to find out. ?? ?? ?? ?? ...read more.