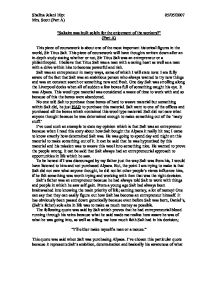 &quot;Saltaire was built solely for the enjoyment of the workers?&quot;

"Saltaire was built solely for the enjoyment of the workers?" (Part A) This piece of coursework is about one of the most important historical figures in the world, Sir Titus Salt. This piece of coursework will have thoughts written down after an in-depth study stating whether or not, Sir Titus Salt was an entrepreneur or a philanthropist. I believe that Titus Salt was a man with a caring heart as well as a man with a drive within him to become powerful and rich. Salt was an entrepreneur in many ways, some of which I will state now. I am fully aware of the fact that Salt was an ambitious person who always wanted to try new things and was on constant search or something new and fresh. One day Salt was strolling along the Liverpool docks when all of sudden a few boxes full of something caught his eye. It was Alpaca. This wool type material was considered a waste of time to work with and so because of this the boxes were abandoned. No one told Salt to purchase these boxes of hard to weave material but something within Salt did, he just HAD to purchase this material. Salt went to one of the offices and purchased all the boxes which contained this wool type material. Salt did not care what anyone thought because he was determined enough to make something out of the 'nasty stuff.' I've used such an example to state my opinion which is that Salt was an entrepreneur because when I read this story about how Salt bought the Alpaca it really hit me; I came to know exactly how determined Salt was. He was going to spend day and night on this material to make something out of it. It can be said that he was hypnotized by this material and his mission was to weave this wool into something nice. ...read more.

Something which I felt was a philanthropist act was when I came to know that whenever Salt visited the church he sat amongst the people. I felt it was a very philanthropist act because I came to know that Salt did not look down to the people in fact he respected them just the way they respected him. Even though Salt was wealthier than the people and had a much higher status then any of them he kept his feet on the ground, to an extent, obviously! Salt did not charge any one when coming into the church, maybe he felt a little selfish if he did so? Then again, one would question why he would want people to pay just to worship God, who is Salt to come in-between God and his people! The clever thing is that he did not charge because if he did then he would have been seen as a money hungry business man and I am more than sure he would not want that image. During this coursework I have argued both ends of the spectrum, saying that Salt was an entrepreneur and then saying that he was a philanthropist. But now the tables are about to turn because now I will argue the real thing, the fact that Salt was both, an entrepreneur and a philanthropist. It can be said that he had an entrepreneurial approach to opportunities he saw but the only image that was projected only suggested a philanthropical act. Salt was a risky business man even though good at heart. On the other hand one could say Salt was "Too good to be true?" If a person believed that Sir Titus Salt was nothing but a man of great energy, determination, prudence and generosity then my quote following this will prove just how generous Salt was considered; "Great philanthropist who used his wealth for the benefit of his followers." ...read more.

Could be argued both ways. The village was built for Salt to make money and for people who came from Bradford to restart there life. This was because at that time Bradford was in a bad state, it was so bad that people started to predict life expectancies. Salt wanted an alternative to Bradford and this is where the idea for creating Saltaire took place. At the end of the day Salt did help himself and others during his life, but the fact will still remain that he built and worked with things and people for two reasons. On each of his buildings on the site there are examples of ulterior motives, because basically none of his buildings were built just for one reason. I think that the reason behind Salt's success was his 'plan.' Now, what I mean by saying this is that I am more than certain that Salt had everything planned from day one, how he could create his mills and by whom. It is a fact that his father taught him from a young age that the main priority in life should be to create money. This 'dream' of his fathers he did fulfil alongside gain an image which to be quite honest with you is well respected world wide. Whether one believes that the image was well deserved or not, I will leave it to that. But something which I will say is that even though Salt had self gains in the majority of his work, he did help 'his' people out. He never let them feel as though he was superior, it can be said that he was a down to earth type of a man. But, even though I say this, I do not fully agree with the quote that will end this piece of work because I believe that the quote suggests that Salt was a philanthropist and nothing else and I do not agree with that! "Great philanthropist who used his wealth for the benefit of others." Shalina Jelani 10pt Shalina Jelani 10pt 05/05/2007 Mrs. Scott (Part A) ...read more.