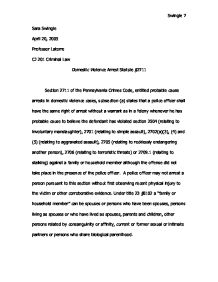 Sara Swingle April 20, 2005 Professor Latorre CJ 201 Criminal Law Domestic Violence Arrest Statute �2711 Section 2711 of the Pennsylvania Crimes Code, entitled probable cause arrests in domestic violence cases, subsection (a) states that a police officer shall have the same right of arrest without a warrant as in a felony whenever he has probable cause to believe the defendant has violated section 2504 (relating to involuntary manslaughter), 2701 (relating to simple assault), 2702(a)(3), (4) and (5) (relating to aggravated assault), 2705 (relating to recklessly endangering another person), 2706 (relating to terroristic threats) or 2709.1 (relating to stalking) against a family or household member although the offense did not take place in the presence of the police officer. A police officer may not arrest a person pursuant to this section without first observing recent physical injury to the victim or other corroborative evidence. Under title 23 �6102 a "family or household member" can be spouses or persons who have been spouses, persons living as spouses or who have lived as spouses, parents and children, other persons related by consanguinity or affinity, current or former sexual or intimate partners or persons who share biological parenthood. The sections that a law enforcement agent could arrest for were not all the ones stated above; back in 1989 they could only arrest without a warrant for sections 2504, 2701, and 2705. ...read more.

(Purdon's, 166). Subsection (c) tells of bail while subsection (d) is the notice of rights to the victim. It states that upon responding to a domestic violence case, the police officer shall, orally or in writing, notify the victim of the availability of a shelter, including its telephone number, or other services in the community. Said notice shall include the following statement: "If you are the victim of domestic violence, you have the right to go to court and file a petition requesting an order for protection from domestic abuse pursuant to which include the following: (1) an order restraining the abuser from further acts of abuse. (2) an order directing the abuser to leave your household. (3) an order preventing the abuser from entering your residence, school, business or place of employment. (4) an order awarding you or the other parent temporary custody of or temporary visitation with your child or children. (5) an order directing the abuser to pay support to you and the minor children if the abuser has a legal obligation to do so. Pennsylvania law seems to be slowly accepting the rest of the states' statutes regarding domestic violence. In 1990 only thirteen states enacted mandatory arrest policies for domestic violence offenders. ...read more.

Also now though, it has been deemed legal to take away the defendant's weapons used to inflict injury upon the victim to further prevent harm to the victim. Even better yet is the inability for these abusers to not able to possess firearms. According to section 6105 persons not to possess, use, manufacture, control, sell or transfer firearms, persons convicted of �2711 are in violation of �6105 if found with firearms. This also includes law enforcement officers who are found in violation of �2711. No one no matter who you are is allowed to own or operate a firearm with a conviction. With this statute in place victims can try and sleep a little easier knowing that their abuser is not allowed to possess. With more minor additions to the law such as this one and the ones made in the past the future of domestic violence calls and convictions are looking brighter. With law heading in the direction that it is soon domestic violence will lessen in frequency and the victims will want to do something about the abuse they are receiving for no reason. The system is learning how to deal with situations like these and the only real way to learn is by example and that is where case law finds its importance in the criminal justice system. ...read more.