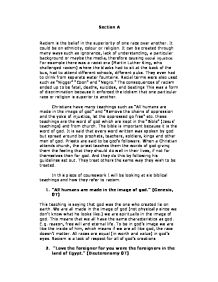 Section A RE Racism Coursework

Section A Racism is the belief in the superiority of one race over another. It could be on ethnicity, colour or religion. It can be created through many ways such as ignorance, lack of understanding, a particular background or maybe the media, therefore causing social injustice. For example there was a racist era (Martin Luther King, who challenged racism) where the blacks had to sit at the back of the bus, had to attend different schools, different pubs. They even had to drink from separate water fountains. Racial terms were also used such as "Nigger" "Coon" and "Negro." The consequences of racism ended up to be fatal, deaths, suicides, and beatings This was a form of discrimination because it enforced the idolism that one particular race or religion is superior to another. Christians have many teachings such as "All humans are made in the image of god" and "Remove the chains of oppression and the yoke of injustice, let the oppressed go free" etc. these teachings are the word of god which are kept in the "Bible" (Jesus' teachings) and from church. The bible is important because it is the word of god. It is said that every word written was spoken by god but spread around by prophets, teachers, soldiers, kings and other men of god. ...read more.

Racism is one of many forms of oppression. You are taking away the rights of someone to be just like you, to be equal. He (Isaiah) is comparing injustice to deep things such as "chains" as they are meant to be very serious and oppressive. After a Christian would have read this teaching, they would think twice before they let whatever comes out their mouth and treat others equally with the same respect as what is wanted. 4. "Love your neighbour as yourself." (Jesus NT) Since Jesus was the son on God, Christians believe that this is one of the most important teachings of all. (As Jesus said it.) To show your appreciation towards god, this law shouldn't be broken. Treat others the way you wish to be treated. The word "neighbour" can mean anyone, not just your next door neighbour. So showing love / respect to others will have its own great rewards. Everyone should be treated the same no matter what race, colour or philosophies. The word Agape is an unconditional love, full of beliefs of equal rights and respect towards others. By Christians showing Agape love towards other people they are showing their love towards god. To disrespect others is to disrespect god. There are many different types of the word love such as Eros; erotic, sexual love, Philia; love shown between friends and Storge; love between family members 5. ...read more.

6. "There is no difference between Jews and Gentile, between men and women; you are one in Jesus Christ." (Paul NT) The word Gentile is another word for a Non-Jew. This quote is saying that there is no difference between races and gender. We are all the same in worth and value. All as one. The quote "all humans are made in the image of god," backs this up. Jesus didn't die for "nothing," he died for peace, for equality and for the rights of others. Church Teachings Both, the Roman Catholic Church and the Church of England have done various things in terms of helping against racism. This is a statement from the Roman Catholic Church, "The Church reproves as foreign to the mind of Christ, any discrimination against people or any other harassment of the, on the basis of their race, colour, condition in life or religion." They played a huge part in preventing all Nazi movement; they did this by showing how wrongly they were going about it. The Church of England has held debates and discussions to edify others of the corruption of racism. The Missionaries has worked very hard to get rid of racism in all areas of the world. Churches were not allowed to be shared by both black and white people. They had to go to separate churches or else they would be frowned upon and had the life beaten out of. However, now it's all mixed. White people have black priests and vice versa. ...read more.