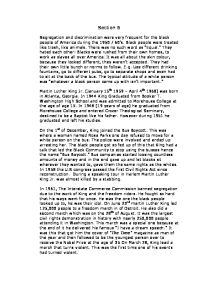 Section B RE Racism

Segregation and discrimination were very frequent for the black people of America during the 1950 / 60’s. Black people were treated like trash, like animals. There was no such word as “Equal.” They hated each other! Blacks were rushed from their own homes, to work as slaves all over America. It was all about the skin colour, because they looked different, they weren’t accepted. They had their own little bunch or norms to follow. E.g. Use different drinking fountains, go to different pubs, go to separate shops and even had to sit at the back of the bus. The typical attitude of a white person was “whatever a black person came up with isn’t important.”

Martin Luther King Jr. (January 15th 1959 – April 4th 1968) was born in Atlanta, Georgia. In 1944 King Graduated from Booker T. Washington High School and was admitted to Morehouse College at the age of age 15. In 1948 (19 years of age) hegraduated from Morehouse College and entered Crozer Theological Seminary, destined to be a Baptist like his father. However during 1951 he graduated and left his studies.

On the 1st of December, King joined the Bus Boycott. This was where a woman named Rosa Parks one day refused to move for a white person on the bus. The police were involved and ended up arresting her. The black people got so fed up of this that King had a talk that led the Black Community to stop using the busses hence the name “Bus Boycott.” Bus companies started loosing countless amounts of money and in the end gave up and let blacks sit wherever they wanted to, gave them the same rights as the whites.  In 1958 the U.S congress passed the first Civil Rights Act since reconstruction.  During a speaking tour in Harlem Martin Luther King Jr. was almost killed by a stabbing.

In 1961, The Interstate Commerce Commission banned segregation due to the work of King and the freedom riders. He fought so hard that his ways went for once. He was the one the black people looked up to, he was their idol. On June 23rd martin Luther King led 125,000 people to a freedom march in of Detroit. He also did a second march which was on the 28th of August. It was the largest civil rights demonstration in history with nearly 250,000 people attending it in Washington. This march was a special one because at the end of it he delivered his famous “I have a dream speech.” It was this that got him the cover of “The Time” magazine as man of the year and then followed to be the youngest person ever to receive the Nobel Prize at the age of 35 On March 28, King lead a march that turns violent. This was the first time one of his events had turned violent.

The day that ended it all for him was the day he delivered the “I've been to the Mountaintop” speech. At sunset on April 4th Martin Luther King was finally shot on the balcony of the Lorraine Motel in Tennessee by James Earl Ray. Everything he had ever worked for was a big help, he had brought the word equality back into peoples lives and taken the word racism out. That doesn’t mean that during all this life was all rosy, a group had formed called the “Ku Klux Klan” aka “KKK” they saw black people as rats, had to get rid or them before their country was infested with them. They went around the streets at night murdering any random black person they saw. They burned down houses belonging to them. They used any terrorising and violent method they could think of to get their hands on a black man.
Since King was a Christian, all of his actions were taken from the bible. “All humans are made in the image of God” is one of the teachings he followed. This put forward Kings Fight. All he wanted was for the blacks to have the same rights as the whites. “Bless those who curse you, pray for those who ill-treat you” is another he followed. He never turned to violence with the way him and his people were treated, they were all quiet protests.  The teaching “Love your neighbour as yourself” got him thinking that if he wants something, he has to give something else in return. This helped him get what he achieved; he was admired for his calmness. “There is no difference between Jews and Gentiles, between men and women, your all one in Jesus Christ” swayed King’s values that everyone is seen the same through the eyes of god. “Remove the chains of oppression and the yoke of injustice” strongly put kings views in one direction. He alleged that not a single person should ever be exploited. “Our love should not just be talk, it must be true love that shows itself in action” is another one he followed, he gave all the respect he could to other black people. He didn’t just say something, he did it. That’s what counts. “Turn the other cheek” is another teaching he followed, he never went to violence when they did. He always kept calm, never went out of line once.