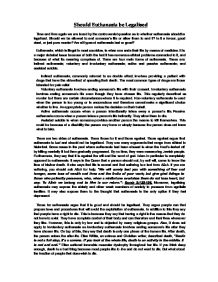 Should Euthanasia be Legalised?

Should Euthanasia be Legalised Time and time again we are faced by the controversial question as to whether euthanasia should be legalised. Should we be allowed to end someone's life or allow them to end it? Is it a favour, good deed, or just pure murder? Are all types of euthanasia bad or good? Euthanasia, which is illegal in most countries, is when one ends their life by means of medicine. It is a major debated issue because of both the fact it has numerous ethical problems connected to it, and because of what its meaning comprises of. There are four main forms of euthanasia. These are: indirect euthanasia; voluntary and involuntary euthanasia; active and passive euthanasia; and assisted suicide. Indirect euthanasia, commonly referred to as double effect, involves providing a patient with drugs that have the side-effect of speeding their death. The most common types of drugs are those intended for pain relief. Voluntary euthanasia involves ending someone's life with their consent. Involuntary euthanasia involves ending someone's life even though they have chosen life. This regularly described as murder but there are certain circumstances where it is required. ...read more.

Ellen Wilkie, an actress and Christian writer, described death, "Death is not a full stop, it's a comma. If you look at the whole life, death is an activity in the middle. It is not and end." Ellen suffered incurable muscular dystrophy throughout her life. If you think deep enough, death is a bad thing because most people like to live and do not want to die. But what about the fraction of people that does wish to die. There is major difference between sanctity of life and quality of life and which one has more value. Sanctity of life is the idea that all life is sacred and is argued mainly by those who are on the side of the life, the pro-life in political and ethical debates. Quality of life is a term given to describe how well-being a person is. It can judged by ones financial status and other material possessions; ones ability to do certain things or disabilities; or by their spiritual status. It is the quality of life that drives people into euthanasia. Whether it is the quality of life, or sanctity of life is more important depends on the person. ...read more.

Many disabled people lead satisfying lives if their scale of achievement was not looked down by the rest of the general public. A woman who suffered from a condition known as cerebral palsy, which is condition that causes damage to the brain and prevents you from controlling your muscles, said "What I have not been able to accept is the way people treat me and the feeling that I'm a burden to my family and myself". These kinds of people that have similar dilemmas need emotional support and need to understand a reason for their life. Besides emotional strengthening, the amount and accessibility of care must be increased. If the person who is ending the life has the permission of the person who is going to die, I think it should be allowed. However, their should be rules on this e.g. 2 or more doctors picked at random must ensure that there is no other method to save the person or that the person will suffer great amounts of pain. We should try and prevent euthanasia as much as we can. We should try all alternatives and experiment in all other ways before carrying out euthanasia. Instead of euthanasia, we should be helping people out of their misery, not simply putting them out of it. ...read more.