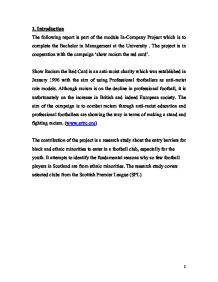 1. Introduction The following report is part of the module In-Company Project which is to complete the Bachelor in Management at the University . The project is in cooperation with the campaign 'show racism the red card'. Show Racism the Red Card is an anti-racist charity which was established in January 1996 with the aim of using Professional footballers as anti-racist role models. Although racism is on the decline in professional football, it is unfortunately on the increase in British and indeed European society. The aim of the campaign is to combat racism through anti-racist education and professional footballers are showing the way in terms of making a stand and fighting racism. (www.srtrc.org) The contribution of the project is a research study about the entry barriers for black and ethnic minorities to enter in a football club, especially for the youth. It attempts to identify the fundamental reasons why so few football players in Scotland are from ethnic minorities. The research study covers selected clubs from the Scottish Premier League (SPL) 2. Aim & Objectives The aim of the project is: Try to find reasons - or even hypotheses - as to why so few football players in Scotland are from ethnic minorities. The real difficulty lies indeed not in determining what objectives we need, but in deciding how to set them. There is only one fruitful way to make this decision: by determining what shall be measured in each area and what the yardstick of measurement should be. Drucker P.F. 1961 *There are many reasons which explain why so few football players in Scotland are from ethnic minorities. Most of ethnic monitory group think that football is not the main job they are willing to pursue as a career. Racism plays a big part in changing people interest like this sport. Sometimes It affects them to move country to play football because they don't take part in a football match and they been treated badly unless if they are playing for their own country &club. ...read more.

Moreover, Top clubs now have top players from many countries and ethnic minorities born and brought up in Britain. The racism experienced by these players has decreased; this good result refers to the campaigns in schools and at football grounds. From their efforts, for example in Britain there are two organisations working to end the racism in football crowds such as 'Show Racism the Red Card' and 'Kick Racism out of Football'. The show racism the red card is one of the best ways to send a clear message that the racism doesn't belong in Scotland. This red card shown in football when a player is sent off the field for gross misconduct. The club then takes disciplinary action against players who engage in racial abuse. Shown racism the red card can work with all other such as supporters, voluntary organisation, local authorities, local business, and sponsors and with police. It's easily entered to school as package to raise awareness among young people to show the harmful and dangerous effect of racism and to show that there is no place for racism or other form of discrimination in civilised society 4. Methodology In this chapter there are explicit deliberations on the methodological choices made, showing an appreciation of the possibilities of methods outside the groups of methods that have been chosen. Account is also given of the methods' weaknesses and strengths. There is also a thorough description of the data sources used, in particular which methods are being used for the collection of data, as well as a critical evaluation of the sources. 4.1 Primary Data Although there is a vast range of secondary sources of information, it will be appreciated that they often do not provide the right combination of data or perhaps the data is incomplete. 4.1.1Survey Methods There are different survey methods which can be used to obtain the required information. ...read more.

Besides, for the amateur football, the national authority must to coordinate the multitude of initiatives, which born of association, region authorities and create new actions. o Region level (For amateur football): At this level, there are many solutions, but these solutions are expensive according the region. These actions are essential for founding a better climate during the meetings (violence and racism).The regions need to do: * formations for the people in charge of clubs to anticipate the conflicts on the grounds * A more strict ranking (like victory at 4 points, classification of the fair play, ...) * before each match, introduction of the systematic tightening of hands between the two teams * Meeting of the discipline commission every week * Organization of meetings between the presidents and trainers of clubs which pose problem * Designation for each meeting of a person in charge of the reception and safety on the ground o Governments The government must to follow the football authorities and the associations in the fight against the racism. In 14th March 2006, 423 European members of Parliament signed a motion calling "the fight against racism in football". This motion is the beginning but each government must to create some rules: o Interdiction at some people in the stadium (definitively or partially) o Increase the importance of sentence of racism act o Give more of finance to the association against the racism o The clubs and supporter These actors are the more implicate in the racists act but it is where there are the less of solution: - Need to make some meetings between club and supporter groups before the matches. - Go on the efforts in term of video monitoring, of identity check, of presentation at the police stations for excludes. Also, go on the systematic denunciation of the racist incidents in the stadium by the "real supporters" To manage the racism in the football, it need that all actors work together. And that we take seriously this act which will destroy the game worldwide. 6. ...read more.