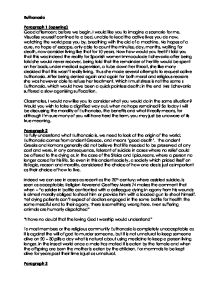 Euthanasia Paragraph 1 (opening) Good afternoon; before we begin, I would like you to imagine a scenario for me. Visualise yourself confined to a bed, unable to lead the active lives you do now, watching the world pass you by, breathing with the aid of a machine. No hopes of a cure, no hope of escape, only able to count the minutes, day, months, waiting for death, now consider living like that for 10 years. Now how would you feel if I told you that this was indeed the reality for Spanish women Immaculade Echevarria after being told she would never recover, being told that the remainder of her life would be spent on her back, under medical supervision, a tube down her throat, she like many decided that this wasn't really living. Thus she made several attempts to request active Euthanasia. After being denied again and again for both moral and religious reasons she was however able to refuse her treatment. Which I must stress is not the same s Euthanasia, which would have been a quick painless death; in the end Mrs Echevarria suffered a slow agonising suffocation. Classmates, I would now like you to consider what you would do in the same situation? ...read more.

In some cases, the illness will slowly destroy their minds, the essence of themselves; even if this is not the case, the huge amounts of medication required to 'control' their pain will often leave them in a delirious and incapable state. Faced with this, it is surely more humane that those people be allowed to choose the manner of their own end, and die with dignity. Indeed diseases such as AIDS, which has no cure, no relief, where death is inevitable. Alzheimer's, a condition that destroys the mind before the body, indeed a good friend of mine has a relative with this condition, and Katherine agrees that if they could see the condition in which they were in they would want for their life to end. For it is mortifying to know your mind is deteriorating to the state of not recognising you family. Paragraph 4 Yet it is not merely the individual who can suffer, because of the current laws on euthanasia; at the moment, doctors are also being put in an impossible position. A good doctor will form close bonds with their patients, and will want to give them the best quality of life they can; however, when a patient has lost or is losing their ability to live with dignity and expresses a strong desire to die, they are legally unable to help. ...read more.

As today in many countries there is a shortage of hospital space. The energy of doctors and hospital beds could be used for people whose lives could be saved instead of continuing the life of those who want to die which increase the quality of care and shortens hospital waiting lists, one of the main reasons for complaints about hospitals is the shortage of space and the waiting lists. Conclusion So classmates, what conclusion have you now come to? Where do you stand in this controversial debate? I fully accept that if Britain were to legalise active and assisted Euthanasia that there would need to be strict guidelines and rules to follow ensuring the right to end ones own life is not abused. But surely this is our right, our right to choose a dignified death, rather than a slow and lingering submission. We should learn from our European neighbours, see how it has benefited countless families and perhaps then we should look to ourselves, it is very hard to try and appreciate how the people who request active Euthanasia are feeling, I hope sincerely that none of you are ever in that position. But just consider for one moment the possibility that you or a loved one close to you was suffering, that they wished to choose a dignified death, but were unable because the law prevented it, just ask yourself how would you feel... Thank you... ...read more.