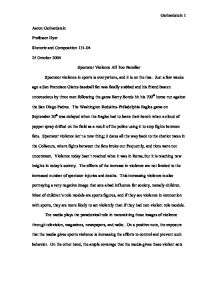 Spectator violence in sports is everywhere, and it is on the rise. Just a few weeks ago a San Francisco Giants baseball fan was fatally stabbed and his friend beaten unconscious by three men following the game Barry

Aaron Gerhardstein Professor Dyer Rhetoric and Composition 131-04 25 October 2004 Spectator Violence All Too Familiar Spectator violence in sports is everywhere, and it is on the rise. Just a few weeks ago a San Francisco Giants baseball fan was fatally stabbed and his friend beaten unconscious by three men following the game Barry Bonds hit his 700th home run against the San Diego Padres. The Washington Redskins-Philadelphia Eagles game on September 20th was delayed when the Eagles had to leave their bench when a cloud of pepper spray drifted on the field as a result of the police using it to stop fights between fans. Spectator violence isn't a new thing; it dates all the way back to the chariot races in the Coliseum, where fights between the fans broke out frequently, and riots were not uncommon. Violence today hasn't reached what it was in Rome, but it is reaching new heights in today's society. The effects of the increase in violence are not limited to the increased number of spectator injuries and deaths. This increasing violence is also portraying a very negative image that sets a bad influence for society, namely children. Most of children's role models are sports figures, and if they see violence in connection with sports, they are more likely to act violently than if they had non-violent role models. ...read more.

More time, effort, and emphasis is always spent on these games which builds the anticipation and enmity just waiting to unleash itself on the opposing players and fans. The commercialization of sports is a major cause in the increase in sports violence. In societies where games were not for profit, like most ancient societies, the games were enjoyed as celebrations of physical skill without competitiveness or violence between athletes, let alone the spectators. However, today's violence among the athletes is being emphasized for the purpose of generating and maintaining spectator interest. Violence is also being used as an effective tactic in winning games. For example, some coaches encourage trying to injure the other team's star player to increase the chances of winning. Violence is also used to enhance an athlete's reputation and popularity. Our society seems to love the "bad boy" image in sports, and is often amused at his actions. As a result, the encouraged violence in athletic competitions has transferred directly over to spectator conduct. From the commercialization of sports, and the pursuit of its profits, has come the sale of alcohol; which is arguably the biggest contributor to spectator violence. Unfortunately, the sale of beer is a major contributor to the financial support of teams. Beer sales bring in profit, and increase attendance sales, but they also dramatically increase fan violence. ...read more.

These measures may not always seem fair, but in the end, they reduce the harmful effects of violence. There comes a point when spectator safety trumps spectator rights, especially if the rights are a cause of the problem. Many owners are also limiting their amount of alcohol sales, which is reducing the fuel for aggressive behavior. Major League Baseball has also mandated that no beer may be sold after the sixth inning. These actions mark the first of many steps that need to be taken to reduce spectator violence. It is plain to see in today's world that spectator violence is rising out of control. It can be seen everywhere, all over the news, permeating every sport. Now that the causes of fan violence are easily seen, the solution seems quite obvious. If the things that instigate fan violence are eliminated, spectator violence will decrease. However, completely eliminating these causes is impossible because of the inherent nature of sports and the unwillingness of society to sacrifice sales for safety. However, the safety of our society unquestionably makes an attempt at minimizing these causes advisable. It is time that our society starts to place safety above money, and it starts with the franchise owners. Sports are so influential in today's society it is a shame they have a negative image. If a consorted effort would be made to reduce sports violence, sports could become the positive influence they should be; building unity, character, and morals. ?? ?? ?? ?? Gerhardstein 1 ...read more.