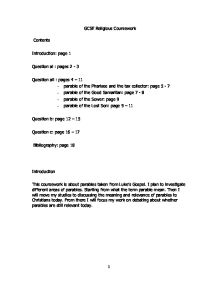 GCSE Religious Coursework Contents Introduction: page 1 Question ai : pages 2 - 3 Question aii : pages 4 - 11 - parable of the Pharisee and the tax collector: page 5 - 7 - parable of the Good Samaritan: page 7 - 8 - parable of the Sower: page 9 - parable of the Lost Son: page 9 - 11 Question b: page 12 - 15 Question c: page 16 - 17 Bibliography: page 18 Introduction This coursework is about parables taken from Luke's Gospel. I plan to investigate different areas of parables. Starting from what the term parable mean. Then I will move my studies to discussing the meaning and relevance of parables to Christians today. From there I will focus my work on debating about whether parables are still relevant today. GCSE Religious Coursework Question ai - what is meant by the term parable? In the dictionary the term parable is described as "a story told to illustrate a moral or spiritual truth". The term parable also has a more significant meaning to it. Parables are some of the best stories, which are known to us from Jesus. There are many different parables or stories such as "the good Samaritan" or "the lost sheep". The word "parable" means "to put beside" or "to compare" and it describes a type of story, which has a parallel meaning that you could put along side it. The word "parable" derives from the Greek word "parobles". These stories were not fantasy tales but were taken from everyday lives. The old explanation for the term parable is parable " an earthly story with a heavenly meaning". It is very easy to recognize why parables are described as " comparisons" because in many parables there is a popular theme associated with comparing the kingdom of God with objects and people. For example in the parable of the "lost son" also known as the "prodigal son". ...read more.

While the man was planting these seeds they fell into different places. Some fell on the pathway, which were eating by birds or trampled on. Some seeds fell on rocky ground and is had no moisture so died. Whilst some seeds fell on bushes of thorns, so when they grew they were choked. Others fell on good fertile soil so when they grew they produced 100 grains each. In this parable the seeds are the word of God. The first seeds represented people who hear the word of God, and then the devil comes and takes the word away from their hearts. The second seeds portray people who receive the word of God with joy, yet have no stability so when temptation comes they fall. The third set of seeds show people that hear the word of God, accept it but are choked by their cares, riches and pleasures. The last set of seeds show the people who heard the word of God, accept it and use it well in their lives and make a difference to others. The message or moral of this parable is that the Kingdom of God will be successful in spite of all frustrations and difficulties. The parable shows the frustration of the labourer with the weeds, greedy birds and rocky ground, yet it still shows the contrast with the picture of a rich harvest. The parable however still has an allegation interpretation where different types of soil represent different hearers of the message of Jesus. People understand that the allegorical meaning was given by the Church when the parable was used for teaching new converts about Christianity people are asked to reflect on "what kind of soil am I?" This tends to miss the original, simple truth of the parable. The parable of the Prodigal Son Another parable, which explains Jesus' teaching on the Kingdom of God, is the "Lost Son" or "Prodigal Sin". ...read more.

The parables of Jesus were told in a very different environment from ours. Today, nevertheless they still contain important moral truths. For example the story of the Good Samaritan, which talks about being prejudice and discriminating against others. Even today we still live in a world where particular people are discriminated against. However when we read parables such as the Good Samaritan, we learn to deal with this problem. Another parable that is self-evident in showing the moral contained in them is the parable of the Lost Son. This parable talks about forgiveness, repentance and acknowledging your faults. This is related to today because there is so much sin, even in Christians and this parable helps us to realise that God can still love us, and let us enter his kingdom. The parable of the Sower is another parable that still shows a powerful moral truth. The parable talks about people and the Word of God. The moral is that when we hear the Word of God, we should not be the "hearers alone, but the doers of the word." This is still relevant today because there is even more temptation today that 2000 years ago. Some people argue that we live in a very sophisticated world today and that stories do not really have a place. However it should be clear that stories occupy a very important place in our hearts and lives today. These parables are still relevant because they still challenge us to reflect on our own values in relation to each other and to God. Another point to consider is that parables are not able to deal with modern issues such as disease, environmental issues and modern warfare. However, we must take into consideration that parables are great works and their characters and situations have a correspondingly universal quality that can be understood by anyone today. This is because they deal with the basic needs of human beings. We do not need special insight to understand the parable of the lost son, or the parable of the good Samaritan, their meanings are obvious as read them. ...read more.