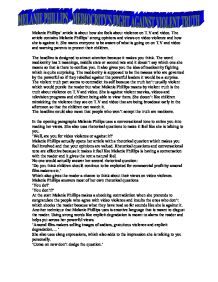 Melanie Phillips' article is about how she feels about violence on T.V and video. The article contains Melanie Phillips' strong opinions and views on video violence and how she is against it. She wants everyone to be aware of what is going on on T.V and video and warning parents to protect their children. The headline is designed to attract attention because it makes you think. The word mediocrity has 2 meanings, middle state or second rate and it doesn't say which one she means so that is there to confuse you. It also gives you the idea of mediocrity fighting which is quite surprising. The mediocrity is supposed to be the masses who are governed by the powerful so if they rebelled against the powerful leaders it would be a surprise. The violent truth part seems to contradict its self because the truth isn't usually violent which would puzzle the reader but what Melanie Phillips means by violent truth is the truth about violence on T.V and video. ...read more.

'Amoral film-makers selling images of sadism, gratuitous violence and explicit degradation....' She also uses slang expressions, which also adds to the impression she is talking to you personally. 'Come on now don't dodge the question.' Melanie Phillips uses sarcasm when she talks about Michael Winner and Dr Guy Cumberbatch. She calls Michael Winner an exploiter, which is her real opinion of him but she sarcastically corrects herself and calls him a creative artist, which is his opinion of himself. And again for Dr Cumberbatch, she says he uses exploitation, which is what she thinks it is and then sarcastically corrects herself and calls it artistic freedom which they say it is. It is a clever way of putting across her views and not getting into trouble. Melanie Phillips starts off with quite long sentence and using only small words but as the article wears on she starts to use clever long words that mean the same as a long sentence of small words. This illustrates her large vocabulary. ...read more.

The picture emphasizes Melanie Phillips' views on amoral filmmakers. My opinion is that there is a lot of violence on T.V and video now and some impressionable children might copy what they see on T.V but it is really up to the parents to decide whether or not they want their children to see it or not. If parents don't want their children watching the violence then they shouldn't buy the videos, or they should change the channel and not ruin it for the people who don't mind the violence with their whining. If they were to cancel all things violent then they would have to cancel the news and most cartoons. The article has a very effective opening that draws in the reader with a rhetorical question and conversational tone but as the reader reads on it starts to get more serious and less effective. When the conversational tone stops and she starts to try and prove her point, the lack of solid evidence doesn't convince the reader. So, overall the article has a very effective opening but loses its impact at the end. ...read more.