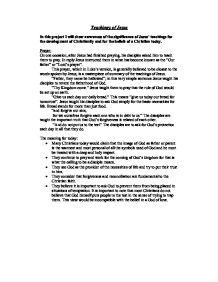 Teachings of Jesus In this project I will show awareness of the significance of Jesus' teachings for the development of Christianity and for the beliefs of a Christian today. Prayer: On one occasion, after Jesus had finished praying, his disciples asked him to teach them to pray. In reply Jesus instructed them in what has become known as the "Our father" or "Lord's prayer". This prayer, which in Luke's version, is generally believed to be closest to the words spoken by Jesus, is a masterpiece of summary of the teachings of Jesus. "Father, they name be hallowed"; in this very simple sentence Jesus taught his disciples to revere the fatherhood of God. "Thy Kingdom come." Jesus taught them to pray that the rule of God would be set up on earth. "Give us each day our daily bread." This means "give us today our bread for tomorrow". Jesus taught his disciples to ask God simply for the basic necessities for life. Bread stands for more than just food. "and forgive our sins, for we ourselves forgive each one who is in debt to us." The disciples are taught the important truth that God's forgiveness is related of each other. "And do not put us to the test" The disciples are to ask for God's protection each day in all that they do. The meaning for today: * Many Christians today would claim that the image of God as father or parent is the warmest and most personal of all the symbols used of God and he must be treated with a deep and holy respect. ...read more.

They still believe that the kingdom of God is something present in the lives of men and women. Some say that to belong to the Kingdom of God is the same as belonging to the church. Others claim that to belong to the Kingdom of God is not exactly the same as belonging to the church. Being a member of the Kingdom goes beyond simply belonging to any individual church. They believe that the kingdom of god is to do with the whole person. It is the declaration of the whole life to God. The parables of the Kingdom, therefore, are still seen as relevant today by all Christians. They may be set in the everyday life of two thousand years ago and, therefore, seem somewhat remote from modern times, but the meaning of them is still true. Good and Evil: T he Sermon on the plain, reported by Luke, is given to the disciples and therefore, must be meant to apply to Christian discipleship. The Sermon is a collection of different teachings and was probably not delivered at the same time. The word "beatitude" means "blessed". It is a term of encouragement. Luke mentions four such encouragements. How blest are those in need, the hungry, those who weep and those who are persecuted because of Jesus. Their reward will be a rich one in the Kingdom of heaven. In contrast, alas for those who are rich, well-fed, happy and have a position of flattery among men. ...read more.

If anyone wishes to be a follower of mine, he must leave self behind; day after day he must take up his cross, and come with me (9:23). In this passage is found the hardest saying of Jesus about discipleship. Jesus gives two small parables about counting the cost of discipleship in chapter 14. 1. The man who is building a tower is wise only if he estimates the cost first to see if he can afford it. 2. The king who is going to war is wise only if he works out that his army is strong enough. Otherwise it would be wise to pursue peace. It is the same with discipleship. It is necessary to calculate the cost of becoming a disciple. The meaning for today: Discipleship still involves suffering and death for many Christians in the world today. In the twentieth century, many Christians have suffered martyrdom for their faith. Hundreds of clergy and laity, both Roman Catholic and Protestant, lost their lives in the Germany of the third Reich. Many hundreds have been killed in the political struggles of south America, in the missionary work of the church in Africa and in the fight for religious freedom in many countries behind the iron curtain. The twentieth century has its own Christian martyrs: St Maximillian Kolbe, Dietrich Bonhoeffer, Archibishop Romero, to name but three. for each one remembered there are many more whose names are little remembered but who suffered death because they were disciples of Christ. Salvation: Salvation is the freedom of one from sin and wrongdoing. ...read more.