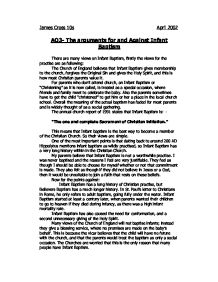 The arguments for and Against Infant Baptism

James Cross 10s April 2002 AO3- The arguments for and Against Infant Baptism There are many views on Infant Baptism, firstly the views for the practise are as following: The Church of England believes that Infant Baptism gives membership to the church, forgives the Original Sin and gives the Holy Spirit, and this is how most Christian parents value it. For parents who don't attend church, an Infant Baptism or "Christening" as it is now called, is treated as a special occasion, where friends and family meet to celebrate the baby. Also the parents sometimes have to get the child "christened" to get him or her a place in the local church school. ...read more.

They also felt as though if they did not believe in Jesus or a God, then it would be unsuitable to join a faith that rests on these beliefs. Now for the points against: Infant Baptism has a long history of Christian practise, but Believers Baptism has a much longer history. In St. Paul's letter to Christians in Rome, he only refers to adult baptism, going fully under the water. Infant Baptism started at least a century later, when parents wanted their children to go to heaven if they died during infancy, as there was a high infant mortality rate. Infant Baptism has also caused the need for conformation, and a second unnecessary giving of the Holy Spirit. ...read more.

This I feel is a sensible option. The practise of Infant Baptism's history is shallower, and newer, which to me suggests that the soul reason for the practise was the high infant mortality rate, which I have previously mentioned. However believer's baptism's history is greater and goes back a century longer. So weighing up these arguments, I believe that Infant Baptism is wrong, because the child has a right to know what is happening to it, so should be given the choice whether he or she wants to be baptised when older. The idea of infant baptism I do agree with. At the time of the initiative parents were scared for their child, and out of love for them, baptised them. Now though, as infant mortality rates are minimal, I feel as though believer's baptism is the way that most people would prefer to have. ...read more.