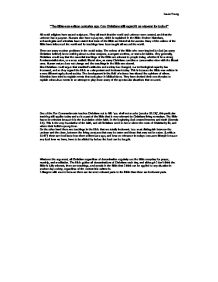 ''The Bible was written centuries ago. Can Christians still regard it as relevant for today?''

''The Bible was written centuries ago. Can Christians still regard it as relevant for today?'' All world religions have sacred scriptures. They all teach that the world and universe were created, and that the universe has a purpose. Humans also have a purpose, which is explained in the Bible. Modern historians, archaeologists and scientists have stated that texts of the Bible are historical documents. Many of the writers of the Bible have influenced the world and its teachings have been taught all around the world. There are many modern problems in the world today. The writers of the Bible who were inspired by God (as many Christians believe) ...read more.

This is because the Bible was written in a very different agricultural society. The development in the field of science has altered the opinions of others. Scientists have tried to explain events that took place in biblical times. They have devised their own theories to explain miraculous events in an attempt to play down many of the spectacular situations that occurred. One of the Ten Commandments teaches Christians not to kill: 'you shall not murder (exodus 20:13)', this particular teaching still applies today and so is a part of the Bible that is very relevant for Christians living nowadays. ...read more.

(Leviticus 11:47)' these are food laws from three millenniums ago, and bear no relevance in todays consumer lifestyle because any food laws we have, have to be abided by before the food can be bought. Whatever the argument, all Christians regardless of denomination regularly use the bible everyday for prayer, worship, and meditation. The Bible guides all denominations of Christians each day, and although I don't think the Bible is fully relevant, there are teachings, and morals in the Bible that I think can be applied to any situation in modern day society, regardless of the context it is written in. I disagree with source because there are far more relevant parts to the Bible than there are irrelevant parts. Laura Young ...read more.