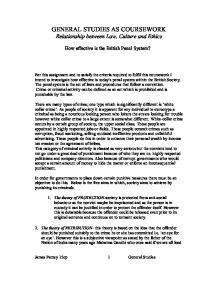 GENERAL STUDIES AS COURSEWORK Relationship between Law, Culture and Ethics How effective is the British Penal System? For this assignment and to satisfy the criteria required to fulfil this coursework I intend to investigate how effective is today's penal system within the British Society. The penal system is the set of laws and procedures that follow a conviction. Crime or criminal activity can be defined as an act which is prohibited and is punishable by the law. There are many types of crime; one type which is significantly different is 'white collar crime'. As people of society it is apparent for any individual to stereotype a criminal as being a notorious looking person who loiters the streets looking for trouble however white collar crime to a large extent is somewhat different. White-collar crime occurs by a certain group of society, the upper social class. These people are appointed in highly respected jobs or fields. These people commit crimes such as corruption, fraud marketing, selling outdated ineffective products and unfaithful advertising. These people do this in order to enhance their personal wealth by income tax evasion or the agreement of bribes. This category of criminal activity is classed as very serious but the convicts tend to not go under a great deal of punishment because of who they are i.e. highly respected politicians and company directors. Also because of corrupt governments who would accept a certain amount of money to hide the matter or enforce an inconsequential punishment. In order for governments to place down certain punitive measures there must be an objective to do this. Below is the five aims in which, society aims to achieve by punishing its criminals. 1. The theory of PROTECTION-society is protected from anti-social behaviour as the convict maybe be imprisoned and as the person is in custody it can be justified in order to protect the offender itself. ...read more.

A religious viewpoint that can be used to discuss the matter of Capital Punishment is the Anglican viewpoint. This viewpoint says: 'God is merciful and man shares in God's merciful nature' 'The taking of Life as a penalty devalues human life' 'There is substantial doubt that capital punishment has any deterrent effect' 'The abolition of Capital Punishment gave prison chaplains a chance to work for the reform of all prisoners rather than just some of them' This Anglican viewpoint is stating that they totally resent the idea of Capital Punishment and see it is as a morally wrong punishment and an idea in which God would detest. The viewpoint explains how man shares a merciful nature with God and the taking of life devalues human life so basically they are saying that the taking of life is depriving a life with a merciful nature. The viewpoint goes on to say how they believe that Capital Punishment seems to have no deterrent effect, this could be true however they are basing these ideas on statistics they have come across which could have easily been modified in some way in order to confirm their views. Finally the viewpoint states how the removal of capital punishment gave prison chaplains a chance to work for the reformation of all prisoners rather than just a few. Here the viewpoint is explaining that the chaplains i.e. the prisoners attached to chapels, military body or institution work well in order to understand the wrong doings they have done and gain the opportunity for others to go under the same process as the governments realise this is a better deterrent method. Although once again, this statement could be totally false to back up the Anglicans point of view. CAPITAL PUNISHMENT FOR AND AGAINST I shall present the views for and against Capital Punishment Arguments For: * Capital Punishment is the deterrent to crime because once the offender is killed no longer can he or she be part of any criminal activity. ...read more.

Looking at Scotland they implement a very young age of 8 years old followed by England and Wales situated at 10 years old. This could be the reasoning behind the Jamie Bulger case and the convictions of the two murderers, the legal system realised that this act carried out by these 10 year old boys was suitable enough for them to be taken accountable for and therefore treated them as an adult for the act in which they done however this was disputed by the offenders' relations. On the other end of the scale Germany implement an adult age of 18 for the responsibility of a crime. Conclusion Upon producing this investigation I have explored how effective the British penal system is within this society in doing this I intend to conclude that the British Penal system is doing its function in order to ensure criminals are put through the necessary procedures if convicted. The penal system is working in order to aim to achieve a more tolerant society and also aiding the country's economics by sentencing into alternative forms of punishment e.g. community service orders. However there have been certain mishaps in the past which have been recognised now as the wrong doing of the system, if we take the Ruth Ellis case for an example where she was brutally executed based on only half the facts being knowledge to the people in the court which is why now the case is being sent to the court of appeal where an over turn for the original conviction is possible. This shows an improvement of the system as these facts have been considered. There are also a new strategies to deal with the minor offenders by issuing community service orders where they help society in order to realise what they have done and what they should learn from it. Probation orders also being issued, have statistically shown they are a better deterrent effect to re-offending compared to that of prison. ...read more.