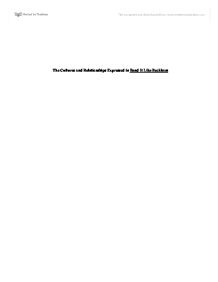 The Cultures and Relationships Expressed in Bend It Like Beckham

The Cultures and Relationships Expressed in Bend It Like Beckham The movie Bend It Like Beckham was released in 2002 by producer Gurinder Chadha. Ever since then, it has received critical acclaim for being "full of easy, an impeccable sense of milieu that is the result of knowing the culture intimately enough to poke fun at it while understanding its underlying integrity."* The movie has been nominated several times as "Best Film of the Year". Although this movie is considered a comedy, it expresses relationships and cultures in a serious tone. I feel the way the characters behave with one another demonstrates a deeper meaning underneath the comedic outline, for example the two relationships of Jules and her parents and Jasminder and her soccer coach. The cultures in the movie are also very diverse, such as the Indian culture compared to the culture of soccer. Both of the cultures are respected in different ways, like how the Indian culture is restricted by a social hierarchy and the soccer culture is respected in unity. Jules' and her parent's relationship can be described in many ways, but I feel the two dominant features displayed within their relationship have to be adaptability and cautiousness. I feel Jules's parents have been adaptable to Jules' soccer career because they always want what is best for Jules. ...read more.

It is his first instinct to run over to Jasminder when he sees her struggling. At first Jasminder seems shocked that Joe would touch her feet, but in the end, they both come to an understanding with each other and do what they feel is right. The Indian culture is seen with a stereotypical point of view during this movie, and sends different messages to every individual viewer. For me, I felt the Indian culture, although it was displayed in a stereotypical fashion, demonstrated the humour that lies underneath the strict lifestyle of an Indian family. There are many ways to describe the Indian culture, but I have shortened this into just five 5 characteristics. The first trait I will describe is transition. In the India culture, the elders teach the younger generation how to follow and respect the Indian culture. One way, in the movie, where this is illustrated is when Jasminder's mother tries to teach her how to make "aloo gobi" which is an Indian dish. She tries to teach her daughter this because she wants Jasminder to teach her children this dish in the future. This dish has been a family recipe which has been passed down from generations. The next characteristic would be the language. Jasminder's parents talk in the Indian language, which separates them from the English people who live around them. ...read more.

It also means they long for soccer when they are not playing. For example when Jasminder's parents restrict her from playing soccer, Jasminder cannot take the agony any longer and decides to secretly play soccer behind their backs. The last important concept related to soccer and culture is spirituality. Spirituality is the inner well being of humans and is expressed through language or actions. Soccer is for the well being of humans internally and externally. It is good for humans externally because it is a sport which helps a person get into shape. Internally it is a time for concentration. For example all the times Jasminder played soccer, it benefited to her well being, and was expressed through actions. All her movements related to soccer were in unison with the game which makes soccer such an extraordinary sport and culture. I feel Bend It Like Beckham is a very diverse movie. It describes relationships and cultures with a depth, which is incredible for a movie less than two hours long. The movie did a particularly good job with the relationships of Jasminder and Joe, and Jules and her parents. The main cultures in this movie would be the Indian culture and the soccer culture. The movie highlighted how every relationship, and every culture is different in many ways. This movie, since it is targeted to the younger audience, illustrates the point that being different is always a good thing, even if it is embarrassing. ?? ?? ?? ?? 6 ...read more.