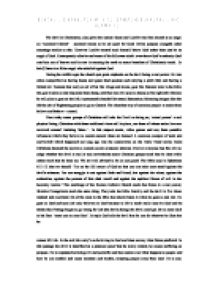 THE DEVIL IS A REAL POWER: WHO IS RESPONSIBLE FOR EVIL AND SUFFERING Discuss from a Christian viewpoint.

'THE DEVIL IS A REAL POWER: WHO IS RESPONSIBLE FOR EVIL AND SUFFERING' The devil in Christianity, also given the names: Satan and Lucifer was first created as an angel an 'Anointed Cherub' anointed means to be set apart for Gods Divine purpose alongside other meanings similar to this. However Lucifer wanted exalt himself above God rather than just be an angel of God. Consequently after he and some of his followers tried t over-throw God's authority God cast him out of heaven and is now is roaming the earth so some branches of Christianity teach. In brief, Satan is a fallen angel who rebelled against God. During the middle ages the church put great emphasis on the devil being a real power. He was often exemplified as having horns and goats hind quarters and carrying a pitch fork and having a forked tail. Features that carry an air of bat like wings and talons, goat like features were in the bible the goat is seen as less important than sheep, said that man will place a sheep on his right side whereas he will place a goat on the left; it presumably headed for eternal damnation. ...read more.

the devil could get Job to curse God to his face: 'curse you to your face'. In reply God tells the devil that he can do whatever he likes but he cannot kill Job. In the end Job carry's on believing in God and does not say what Satan predicted. In this passage the devil is described as a presence proof that he really existed, he causes suffering on propose. He is expressed as being evil and powerful and has control over what happens to people and how he can meddle and cause mayhem and trouble, tempting people away from God. He is also shown as tempting Jesus himself, again in this passage he is shown as a physical presence. In several other places in the bible Satan is shown in other forms such as a Dragon or a snake that the very beginning when the 'original sin' happened. Those who still believe that the devil is an actual power assume that the devil rules a host of his fallen angels - his demons. They spend their days causing physical and mental afflictions. ...read more.

It was not put there by God. Lucifer created it.' (This is found in Ezekiel 28:15) Like man, the angels were created perfect, and with a free will. To conclude this essay I make the judgement that Lucifer does not exist in a physical form. I see the bible as a set of guidelines rather than text that recollects what has actually happened. In this respect I think that the bible was written to help people understand and teach people things that now we can understand more clearly through science; if you told someone straight on some of the facts and science we known today to a person from Jesus' time they would not understand; through stories however you get the ideas and teachings and information across more simply. For example the original brothers Grime stories have been written more simply for younger eyes to understand, and the big proper ones are left until they grow up. Over all my belief is that although I may refer to things as being the devils doing in truth I do not believe that he is a real being just an expression to help teach and understand evil and wrong doings and actions like deceit, intentional suffering, tempting. ...read more.