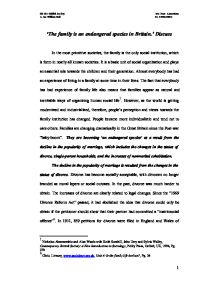 'The family is an endangered species in Britain.' Discuss

'The family is an endangered species in Britain.' Discuss In the most primitive societies, the family is the only social institution, which is form in nearly all known societies. It is a basic unit of social organization and plays an essential role towards the children and their generation. Almost everybody has had an experience of living in a family at some time in their lives. The fact that everybody has had experience of family life also means that families appear as natural and inevitable ways of organizing human social life1. However, as the world is getting modernized and industrialized, therefore, people's perception and views towards the family institution has changed. People became more individualistic and tend not to care others. Families are changing dramatically in the Great Britain since the Post-war "baby-boom". They are becoming 'an endangered species' as a result from the decline in the popularity of marriage, which includes the changes in the status of divorce, single-parent households, and the increases of nonmarital cohabitation. The decline in the popularity of marriage is resulted from the changes in the status of divorce. Divorce has become socially acceptable, with divorces no longer branded as moral lepers or social outcasts. In the past, divorce was much harder to obtain. ...read more.

Nevertheless, today one's own an apartment and vehicles have become almost the symbols of passage into adult status. Hence, it is controversial for a person with stable income and network of friends and other family members to help with childcare, raising a child alone can be an emotional and fanatical burden. According to sociologists Sara McLanahan and Karen Booth, children from mother-only families are more likely than children in two-parent families to have poor academic achievement, higher school absentee and dropout rates6. Does living in a one-parent family cause all of this? Certainly not, many other factors including poverty, discrimination, unsafe neighborhoods and high crime rates are also contribute to these problems. Single mothers can often be the target of unfavorable press attention in which single parenthood is associated with 'welfare scrounging7'. Indeed the fact that a single-parent household became popular is because a special social provision. Government policy is much more favorable to the widowed parent than the divorced parent, though their situations are very similar. In view of the fact that marriage has became decreasingly, and due to the fear of marriage, men and women tend to lives together without married. This is called the cohabitation. There have always been some unmarried couples that lived together openly as lovers rather than husband and wife. ...read more.