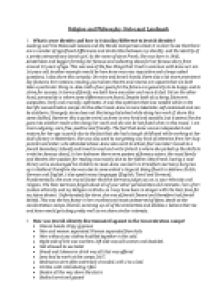 The Holocaust - personal response to Anne Frank's diary and the problem of evil for a benevolent God.

﻿Religion and Philosophy: Holocaust Landmark 1. What is your identity and how is it similar/different to Jewish identity? Looking over the Holocaust lessons and the Hands Comparison sheet, it is clear to see that there are a number of significant differences and similarities between my identity, and the identity of a pretty extraordinary Jewish girl, by the name of Anne Frank. She was born in 1943, Amsterdam and beggar forming her famous and collecting ideas for her famous diary from around 13 years of age. This was one of the few things that I had in common with Anne as I am 14 years old. Another example would be how Anne was very inquisitive and always asked questions, I also share this curiosity. On mine and Anne?s hands, there also a lot more prominent key features. For instance, reading, journalism theatre and cinema are aspects that we both take a particular liking in. Also, both of our goals for the future are generally to be happy and to strive for success. In terms of family, we both have one sister and mum & dad. Yet on the other hand, personality is where some differences are found. ...read more.

That is why I believe that none of these words should be used to describe the Jew?s Yahweh in the context of this one event. The belief that this event is a contradiction is moreover proved in the fact that Yahweh did not intervene and stop the unjust outcome of the holocaust. Additionally, Jews believe that Yahweh created humans and keeps them alive, and Yahweh is a sustainers?. Meaning he sustains the Jew?s quality of life. It may be true that Yahweh created the Jews, but he certainly did not sustain them in this case. This shows that the Jew?s Yahweh is more of a Deistic god (a god who creates the universe and then takes a back seat) rather than a theistic god. Also, Yahweh is also described by the Jews as being the three O?s, Omniscient, Omni-benevolence and Omnipotence. If Yahweh really was all knowing, then how was the Holocaust not in the foreseeing future of Yahweh?s eyes? Therefore their god must?ve known that this event was coming and Yahweh should?ve then done something about this. Omnipotent meant that Yahweh was all-powerful. But god?s actions were not exactly powerful at all. ...read more.

The reality is that he only did it for the benefits that he would gain. He may have sacrificed a lot of money and did not make any profits from the Jews. But after all, the employment of the Jews did not cost anything either. But it made Oscar popular amongst the Jews and gave him a great status. If he helps other people, it will ultimately help him as well. This shows that he is egoistic and that he is only doing it for the plaudits, and perhaps even or his place in history as a great man. ?No such thing as a selfless good deed.? However, on the other hand, he can be shown as being very influential and a helpful individual as well. One of his employees said that Schindler spent his entire fortune on the Jews. He had also bribed many SS soldiers into allowing the Jews to be employed by him. This further put him in more danger. Therefore, he had a brief spell in prison. He also showed utilitarianism, by doing everything possible to help the greatest number of people. Looking at all of this, in my opinion I believe that Oscar Schindler was an altruist and was not egoistic at all. This was a selfless good deed as he put himself in great danger to do it. ...read more.