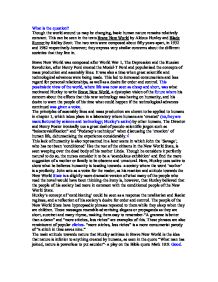 The Impact of Chasidism on Judaism

What is the question? Though the world around us may be changing, basic human nature remains relatively constant. This can be seen in the texts Brave New World by Aldous Huxley and Blade Runner by Ridley Scott. The two texts were composed about fifty years apart, in 1932 and 1982 respectively-however; they express very similar concerns about the different societies that they live in. Brave New World was composed after World War 1, The Depression and the Russian Revolution, after Henry Ford created the Model-T Ford and popularised the concepts of mass production and assembly lines. It was also a time when great scientific and technological advances were being made. This led to increased consumerism and less regard for personal relationships, as well as a desire for order and control. This pessimistic view of the world, where life was now seen as cheap and short, was, and what motivated Huxley to write Brave New World, a dystopian vision of the future wherewas his concern about the effects that this new technology was having on humanity, and his desire to warn the people of his time what could happen if the technological advances continued was given a voice.. The principles of assembly lines and mass production are shown to be applied to humans in chapter 1, which takes place in a laboratory where humans are 'created' (no,they are manufactured by science and technology; Huxley's satire) ...read more.

Good. What is Huxley's point and where in the text is a good example of where nature has been used to serve man? This whole idea of humans wishing to dominate and exploit nature (and then replicate it) appears to be a constant trait in human nature, as Ridley Scott explores this concept very similarly in Blade Runner, despite it having been composed fifty years later.V The consequences of humans' domination and exploitation of natural resources would have been an important issue to Scott in 1982 as it was a time when people were beginning to show concern about the effects of human pollution on the natural environment, and technology on humanity, as technology was continuing to advance rapidly. In addition to this, the 1980s was considered to be the decade of materialism, excess, and corporate geed. Scott, like Huxley, wanted to warn people about the consequences of all of these things, which can be seen in the eye motif used throughout the film. There is an extreme close-up of an eye during the opening sequence, then a machine that measures pupil dilation to determine whether people are replicants or not,(Voigt Kampf test?) and a man who makes eyes, as well as the constant close-ups of character's eyes. This could be seen as calling into question the reality and our ability to perceive it.Ironically, the eye is meant to be able to see things, not be blind to reality. ...read more.

What is your point here? Really, the advertisements for Coco-Cola represent the mega-corporations and their power, while the intrusive, almost subliminal advertisements for the 'off-world colony' is evidence of how these mega corporations have destroyed our natural world, leaving the population of 2019 with no other choice than to desert it for a new world. Scott uses these large, close-up shots of these billboards as a constant reminder to his audience of his purpose, which is to warn us of our possible dystopic world of the future. Though the two texts were written fifty years apart, the composers share the same concerns about technology's impact on human nature and the natural world being dismissed as unimportant, despite the fact that they each use completely different techniques and mediums. The similarities between the two texts suggest that they really do transcend time and reflect what is constant in human nature. Anita, did you write this in 40" It needs more discussion and you have very few quotes from BNW, or techniques from either text. As it stands this is barely a pass mark, perhaps 8 out of 15. My suggestion is that you read some key chapters from the novel (say, 1-3, those chapters set in the Savage Reservation and the last 2-3 chapters, and view the film again, with a pen and paper in hand to jot down ideas, techniques, etc). Again, well done and good luck!!!!!!!!!!!!!! ...read more.