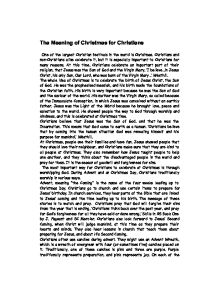 The Meaning of Christmas for Christians

The Meaning of Christmas for Christians One of the largest Christian festivals in the world is Christmas. Christians and non-Christians alike celebrate it, but it is especially important to Christians for many reasons. At this time, Christians celebrate an important part of their religion, that Jesus was the Son of God and the Virgin Mary, 'I believe...in Jesus Christ, his only Son, Our Lord, who was born of the Virgin Mary...' Westhill. The whole idea of Christmas is to celebrate the birth of Jesus Christ, the Son of God. He was the prophesised messiah, and his birth made the foundations of the Christian faith. His birth is very important because he was the Son of God and the saviour of the world. His mother was the Virgin Mary, so called because of the Immaculate Conception, in which Jesus was conceived without an earthly father. Jesus was the Light of the World because he brought love, peace and salvation to the world. He showed people the way to God through worship and kindness, and this is celebrated at Christmas time. Christians believe that Jesus was the Son of God, and that he was the Incarnation. This means that God came to earth as a human. 'Christians believe that by coming into the human situation God was revealing himself and his purpose for mankind,' Westhill. ...read more.

'On these calendars children mark off the days of Advent as they pass,' Celebrations by Celia Collinson and Campbell Miller. These objects all help Christians to mentally prepare for the special time of Christmas. At Christmas, many children take part in nativities. These are plays that tell the Christmas story, and help children learn about Jesus' birth. Carols are often sung at these plays, also to spread the message of Christmas and help children learn about their saviour. When Christmas arrives, Christians worship at church. The vicar reads the Christmas story, and a nativity play may be performed. This teaches people about what and who they are worshipping, and celebrates Jesus. Carols are sung to praise and rejoice God and goodwill is spread throughout the congregation. At Christmas, people are meant to spread goodwill. This is because Jesus always tried to be kind to people, and Christians follow his example. They have lots of ways to do this. Cards are often sent at Christmas to friends and family. They feature images of things to do with Christmas such as a nativity scene or a star. They spread the message of Jesus and show the receiver that somebody is thinking of them at this special time. '...Christmas cards are sent with suitable greetings,' Celebrations by Celia Collinson and Campbell Miller. ...read more.

Angels are used because of their importance in the Christmas story, '...the angel of the Lord appeared unto him in a dream,' Matthew 1:20. Stars are also important in the Christmas story, as one guided the Wise Men to Jesus. Cribs are used at Christmas because they show what happened when Jesus was born. 'The figures of the crib tell the story of the birth of Christ,' Westhill. Lights are put up on the tree and around the home at Christmas because Christ was Light of the World. '...The lights are an important symbol for Christians because they remember Jesus Christ as Light of the World,' Skills in RS Book One by J. Fageant and SC Mercier. Tinsel is used at Christmas as it remembers one woman's faith in God. According to legend, a poor old woman was unable to provide decorations for her children's Christmas tree. During the night, spiders lodged in the tree and covered it with their webs. The Christ Child, seeing this, realised that the woman would be sad to see her surprise spoiled. He turned the spider webs into silver, and the next morning the poor family was dazzled by the brilliant "tinsel" that shone on the tree. A popular decoration at Christmas is holly. It's white flowers represent the purity of the Virgin Mary, the prickly leaves are like the crown of thorns that Christ wore, the red berries show how drops of blood fell when the thorns pricked him, and the bark remembers the bitterness of Jesus' suffering. ...read more.