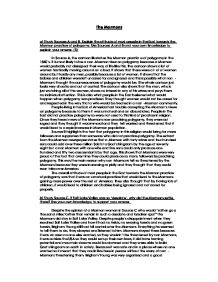 The Mormons a) Study Sources A and B. Explain the attitude of most people in the East towards the Mormon practice of polygamy. Use Sources A and B and your own knowledge to explain your answer. (5) In Source A, the cartoon illustrates the Mormon practice of polygamy in the 1840's. It is most likely to be a non-Mormon view on polygamy because a Mormon would probably not disrespect their way of life like this. The cartoon shows a lot of women frantically moving around on a bed. It shows that there were a lot of women around but hardly any men, possibly because a lot of women. It shows that the babies and children were left uncared for and ignored and this is possibly what non-Mormons thought the consequences of polygamy would be. The whole cartoon just looks very chaotic and out of control. The cartoon also shows that the man, who is just watching all of the women, shows no interest in any of his wives and pays them no individual attention. This is also what people in the East believed what would happen when polygamy was practised. They thought women would not be cared for and respected in the way that a wife would be treated in a non-Mormon community. ...read more.

people accepted his decisions because they believed he was inspired by God so they always respected and listened to what he said. Source C shows how a Mormon woman felt when she reached Salt Lake Valley and this is how most of the Mormons felt when they reached their new home. However, they kept their faith in God and in Brigham Young and they decided to stay and wait to see what would happen under Brigham Young's leadership. Brigham Young soon sorted out all of the problems that faced the Mormons in Salt Lake City. He made some important decisions, which kept people living in Salt Lake Valley. He decided that there should be no private ownership of land or water. The church would assign farmland to people according to their needs. The farming land was organised into tiers laid out around Salt Lake City so that the city and the temple were at the centre of the whole land. He set up plans of how to tackle all of the problems that they faced. They needed water to irrigate the land and enable food to be provided for all so they built a main irrigation ditch and then side ditches were built and each person was given an exact time when they could get water from the ditch. ...read more.

This was successful because these bricks managed to build a home. Brigham Young wanted the new community to be self sufficient so the Mormons didn't rely on anyone else and they attempted to set up specific industries like textiles and iron but the industries did not succeed because they didn't have enough workers. But Young set up a fund that would pay for workers to come from far away. They also were successful in setting up a prosperous community by trying to achieve political independence and freedom from outside interference. They tried to do this by moving outside the United States but Salt Lake Basin part of the United States at the end of the Mexican war in 1848. They also applied for a Mormon state called Deseret, to become one of the states of the United States with power to make laws concerning internal affairs. However, this wasn't as successful because they weren't allowed statehood but a smaller area became the territory of Utah with less self-control and a mixed Mormon gentile government and Brigham Young as governor. Peace was then restored so the Mormon community was successful as a whole. Source D supports this because the picture shows a town with housing, farms, horses and roads that meant that Brigham Young turned the desolate area into a successful settlement for people to live in happily. ...read more.