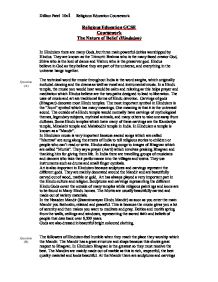 The Nature of Belief

Religious Education GCSE Coursework The Nature of Belief (Hinduism) In Hinduism there are many Gods, but three main powerful deities worshipped by Hindus. They are known as the Trimurti: Brahma who is the many faced creator God, Shiva who is the lord of dance and Vishnu who is the preserver god. Hindus believe in God as they believe they are part of the universe, and everything in the universe hangs together. The technical word for music throughout India is the word sangita, which originally included dancing and the drama as well as vocal and instrumental music. In a Hindu temple, the music you would hear would be calm and relaxing as this helps prayer and meditation which Hindus believe are the two paths designed to lead to liberation. The uses of music and art are traditional forms of Hindu devotion. Carvings of gods (Bhagvan) ...read more.

They use instruments such as drums and small finger cymbals. Art is also important in Hinduism because sculptures and carvings represent the different gods. They are mainly decorated around the Mandir and are beautifully carved out of wood, marble or gold. Art has always played a very important part in the Hindu culture and religion. Sculptures and carvings representing the different Hindu Gods cover the outside of many temples while religious paintings and icons are to be found in Many Hindu homes. The Murtis are usually beautifully carved and made out of variety materials. In the Neasden Mandir (Swaminarayan Hindu Mandir) as soon as you enter the main Mandir you feel calm, relaxed and peaceful. This is because the music gives you a lot of serenity and then makes you want to meditate and pray. Deities and motifs spring from the walls, ceilings and windows, representing the sacred faith and beliefs of people that date back over 8,500 years. ...read more.

The Mandir are surrounded by a wall or by walls which separate the holy space of the Mandir from the outside world. Men and women are to sit separately to avoid distractions from one another. A Mandir is a house of worship for the followers of Hinduism. The structure is specifically reserved for religious and spiritual activities. A Hindu temple can be a separate structure or part of a building. A feature of most Mandirs is the presence of Murtis of the main Hindu deity to whom the Mandir is dedicated. They are usually dedicated to one primary deity, called the presiding deity, and other subordinate deities associated with the main deity. However, some Mandirs are dedicated to several deities, and some have symbols instead of Murtis. Puja when done properly guides oneself towards God, and while doing 'Prarthana' (praying), the Almighty draws closer to the devotee. Therefore it is a two way process that brings the worshipper and the Worshipped closer. ?? ?? ?? ?? Dillion Patel 10x1 Religious Education Coursework. ...read more.