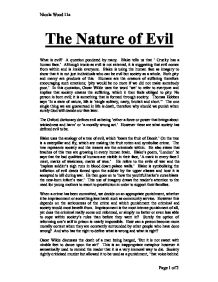 The Nature of Evil

The Nature of Evil What is evil? A question pondered by many. Blake tells us that ' Cruelty has a human face.' Although ironic as evil is not external, it is suggesting that evil comes from within and is inside everyone. Blake is using the human face as imagery to show that it is not just individuals who can be evil but society as a whole. Both pity and mercy are products of this. Humans are the creators of suffering therefore encouraging such emotions; 'pity would be no more if we did not make somebody poor.' In this quotation, Oscar Wilde uses the word 'we' to refer to everyone and implies that society creates the suffering, which it then feels obliged to pity. No person is born evil; it is something that is formed through society. Thomas Hobbes says 'In a state of nature, life is 'single solitary, nasty, brutish and short.'' The one single thing we are guaranteed in life is death, therefore why should we punish when surely God will decide our fate later. The Oxford dictionary defines evil as being 'either a force or power that brings about wickedness and harm' or 'a morally wrong act.' ...read more.

And who has the right to define what is wrong and what is right? Oscar Wilde discusses the death of a man being hanged, 'But it is not sweet with nimble feet to dance upon the air!' This is an inappropriate metaphor however it sarcastically used to remind the reader that it is a very immoral way to die. Society rightly criticised murder but allowed it to be used as a punishment, 'that voice behind me whispered low 'that fellow's got to swing.'' This is a contradiction of beliefs. Another fault of society is to judge and punish those who are different from the 'perceived norm', whether it is through their race, religion or sexuality. It is a 'shameful day' when a supposedly civilised country can overlook its own errors to single out others. Is it the law, which defines evil? Or is it religion? Even though the Bible does not relate directly to today's issues, it still contains many relevant morals that affect the world today, and on which many of our laws are based. The Bible introduces the Ten Commandments, the breaking of which is still immoral or even illegal acts nowadays. ...read more.

However do we not all destroy the thing we love in different ways? This man was hanged yet we will all live. Is it right that we should severely punish someone who has killed when we are all guilty of destroying people? The man who has killed and is imprisoned suffers mental torture from the moment he enters prison until he is actually hanged. The man who as committed mental torture does not have to suffer. The murderer dies 'a death of shame' and the mental torturer is made to feel no remorse and no fear. 'He does not stare, upon the air through a little roof of glass' nor 'cross his own coffin as he move into the hideous shed.' The route of all crime is selfishness and the lack of consideration for the lives and feelings of society around us. Evil is the absence of all good. No man is born either good or bad. It is the things we hear, see and read that influence our decisions. Blake tells us that the search for the tree, which represents evil 'was all in vain: there grows on it the human brain! Nicola Wood 11a Page 1 of 2 ...read more.