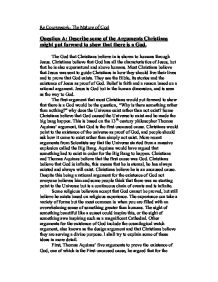 The Nature of God.

Re Coursework: The Nature of God Question A: Describe some of the Arguments Christians might put forward to show that there is a God. The God that Christians believe in is shown to humans through Jesus. Christians believe that God has all the characteristics of Jesus, but that he is also supernatural and above humans. Most Christians believe that Jesus was sent to guide Christians in how they should live their lives and to prove that God exists. They see the Bible, its stories and the existence of Jesus as proof of God. Belief is faith and a reason based on a rational argument. Jesus is God but in the human dimension, and is seen as the way to God. The first argument that most Christians would put forward to show that there is a God would be the question, "Why is there something rather than nothing?" why does the Universe exist rather than not exist? Some Christians believe that God caused the Universe to exist and he made the big bang happen. This is based on the 13th century philosopher Thomas Aquinas' argument, that God is the first uncaused cause. Christians would point to the existence of the universe as proof of God, and people should ask how it came to exist rather than simply not exist. More recent arguments from Scientists say that the Universe started from a massive explosion called the Big Bang. ...read more.

Question B: Explain some of the difficulties which might be found in trying to describe God. There are many difficulties in trying to describe God. One reason we cannot describe God is that the human language doesn't have the words or tools great enough to describe God. The language that we use restricts us. God is beyond human, he is superhuman and we cannot describe him. Although Jesus was sent to Earth to show the qualities of God and provide a path to him, we still don't understand the person of God. Some Christians or religious believers, and even some scientists believe that God operates in more than the three dimensions that humans use. Therefore we cannot see him when he can see us and enables him to see through solid objects such as walls. For example if something existed in only two dimensions such as two flat shapes they could only see one side of each other at a time. However because we exist in three dimensions we can see the whole of the shape at one time. This is the same for God; if he exists in more than three dimensions then he can see all humans at the same time and listen to all our prayers. This proves that God is all present, omnipresent, and all knowing, omniscient. Some non-believers argue that if God is all good all present and all knowing then why is there so much evil and suffering in the world? ...read more.

There are several ways of looking at the problem of a finite Universe; only one of them includes God. So Thomas Aquinas' argument is ambiguous, there are other ways of looking at the same thing, and is not proof that God exists. If that logical argument for the existence of God doesn't prove that God exists then it is my opinion that no argument will, either an argument that has been made or will be made in the future. My personal belief is somewhere between that of Christians and of Atheists. I am Agnostic, someone who doesn't know if God exists or not because he hasn't been proved either to exist or not exist. I do not think that we will ever know if God definitely exists or not, due to the lack of human knowledge. Therefore I disagree with the statement in the question. However that doesn't mean that I don't think that God exists, only that it cannot be proven because there is a lack of experience and knowledge of God. We cannot describe God even if he does exist due to our language, so how could we ever prove that he exists? It is my belief, belief is faith and reason which is prompted by religious experiences or revealed in Jesus or the Bible, that God possibly does exist and is watching over us and probably caused the Big Bang, however it is extremely unlikely that it will ever be proved as we cannot be sure of even who he is. ...read more.