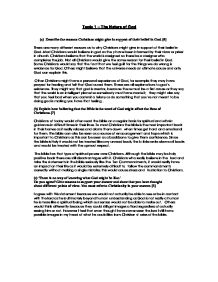 The Nature of God

Topic 1 – The Nature of God

Some Christians would say that the fact that we feel guilt for the things we do wrong is evidence for God. Others might believe that the universe needs an ultimate cause and only God can explain this.

Other Christians might have a personal experience of God, for example they may have prayed for healing and felt that God cured them. These are all explanations to god’s existence.They might say that god is creator, because there must be a first cause or they say that the world is an intelligent planet so somebody must have made it; they might also say that you feel bad when you commit a felony or do something that you’re not meant to be doing god is making you have that feeling.

Christians of today would often read the bible on a regular basis for spiritual and ethnic guidance in difficult times in their lives. To most Christians the bible is the most important book in their homes as it really relaxes and clams them down when times get hard and emotional for them. The bible can also be seen as a source of encouragement and hope which is important to Christians as this can be seen as a backbone to give them confidence. Since the bible is Holy it would not be treated like any unread book, the bible ranks above all books and would be treated with the upmost respect.

The bible has that type of spiritual power over Christians. Although the bible may be holy positive book there are still disadvantages with it. Christians who really believe in the lord and take the statements in the bible seriously like the Ten Commandments, it would really have an impact on their life as it would be extremely difficult to follow the commandments correctly without making a single mistake; this would cause stress and frustration to Christians.

Do you agree? Give reasons to support your answer and show that you have thought

about different points of view. You must refer to Christianity in your answer. [5]

I agree with this statement because we would not actually be able to see or be in contact with the lord as he is ultimately beyond human understanding as God is not really a human he is more like a spiritual being which our senses would not be able to make out. Others would think differently because they could still get images of lord regardless of actually seeing him or not. However I feel that even though I have never seen the lord I still have possible images in my head of what he could like from Christian stories of the bible.