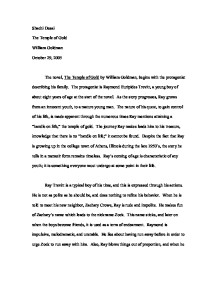 The novel, The Temple of Gold by William Goldman,

Shachi Desai The Temple of Gold William Goldman October 29, 2005 The novel, The Temple of Gold by William Goldman, begins with the protagonist describing his family. The protagonist is Raymond Euripides Trevitt, a young boy of about eight years of age at the start of the novel. As the story progresses, Ray grows from an innocent youth, to a mature young man. The nature of his quest, to gain control of his life, is made apparent through the numerous times Ray mentions attaining a "handle on life," the temple of gold. The journey Ray makes leads him to his treasure, knowledge that there is no "handle on life;" it cannot be found. Despite the fact that Ray is growing up in the college town of Athens, Illinois during the late 1950`s, the story he tells in a memoir form remains timeless. Ray's coming of age is characteristic of any youth; it is something everyone must undergo at some point in their life. Ray Trevitt is a typical boy of his time, and this is expressed through his actions. He is not as polite as he should be, and does nothing to refine his behavior. When he is told to meet his new neighbor, Zachary Crowe, Ray is rude and impolite. He makes fun of Zachary's name which leads to the nickname Zock. ...read more.

Despite their difference, "Euripides" and Zock are partners in crime, and essentially the same person. When they first meet they feel the same way about each other, they were afraid the other wouldn`t like them. The conflict in The Temple of Gold exists internally and is fueled by external circumstances. Ray is informed during a talk with his father that sooner or later, "Everyone fails everyone...We all have our own lives to lead, separately, so when you cry out for help, I can't give it. No one can." Ray must decide between realizing the truth in his father's words and ultimately failing himself by trying to find "a handle on life." The rising action could be the events that transpire after Annabelle dumps Ray for Mr. Janes. Zock accompanies Ray when he goes drinking and allows Ray to drive the car drunken. This singular fault on Zock's behalf leads to his death. Ray feels guilty for causing Zock's death, and though Zock was the one person that had not yet failed him, it was because Zock was killed before he had a chance to. After this, Ray signs himself up for the Army and meets Ulysses who, just like Ray, is contemplating suicide. The difference between the two is that while Ulysses does follow through with this, Ray does not. The climax of the novel comes when Ray breaks down and is put in a mental asylum for a couple of days. ...read more.

The point of view also plays a vital role in communicating the theme to the reader. It allows the reader to become attached to Ray's story. The things Ray shares in his memoir are given a more personal feeling when related by Ray himself, with such raw emotion. Without this point of view, the reader would not be given the insight necessary to fully understand Ray and the things he suffers. A major symbol in the novel is the Temple of Gold. Not only does this represent the treasure Ray seeks, but it also holds a strong connection to Zock. Ray saw the movie, Gunga Din, with Zock. Every time anything in relation to the Temple of Gold is mentioned, Zock comes to mind. That is, until Ray realizes that it cannot be reached, or conquered, which is when he decides to move on. By reading the story, the reader is able to relate to the protagonist, Raymond Euripides Trevitt. Throughout all of which he encounters up until the age of 21, there is at least one thing everyone can relate to, whether it is friendship, love, death, or grief. Just like Ray, the reader can learn that one must move on from the past. Additionally, the reader is able to learn, along with Ray, that there is no such thing as "a handle on life." Even so, one must not give up on life; one must simply find some other meaning in life and move on. ...read more.