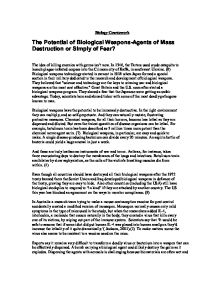 The Potential of Biological Weapons-Agents of Mass Destruction or Simply of Fear?

Biology Coursework The Potential of Biological Weapons-Agents of Mass Destruction or Simply of Fear? The idea of killing enemies with germs isn't new. In 1346, the Tartars used crude catapults to launch plague-infested corpses into the Crimean city of Kaffa, in southwest Ukraine. (8) Biological weapons technology started in earnest in 1918 when Japan formed a special section in their military dedicated to the research and development of biological weapons. They believed that "science and technology are the keys to winning war and biological weapons are the most cost effective." Great Britain and the U.S. soon after started a biological weapons program. They shared a fear that the Japanese were getting an unfair advantage. Today, scientists here and abroad tinker with some of the most deadly pathogens known to man. ...read more.

(4) Even though all countries should have destroyed all their biological weapons after the 1972 treaty banned them the Soviet Union and Iraq developed biological weapons in defiance of the treaty, proving they are easy to hide. Also other countries (including the USA) still have biological stockpiles to respond to "in kind" if they are attacked by another country. The US this year has blocked an agreement on the ways to monitor compliance. (8) In Australia a research team trying to make a mouse contraception vaccine for pest control accidentally created a modified version of mousepox. Mousepox normally causes only mild symptoms in the type of mice used in the study, but when the researchers added IL-4, interleukin, a molecule that occurs naturally in the body, they created a virus that kills every one of its victims, by wiping out part of the immune system. ...read more.

(5) But in that scenario, large numbers of people still might not be affected since infection rates vary among people and because people infected by the virus are highly infectious only seven to 10 days following the outbreak of a rash. Biological weapons have the potential to cause mass destruction, and it is this potential that causes the fear. As we can see in the world today it only causes a few letters with Anthrax in them to cause a whole nation and even global to fear of this new threat. However the actual number of deaths from this new threat is very small (under 10) and 'neither the particular strain or the physical form of anthrax being used is particularly sophisticated, say scientists' (New Scientist, 2001(2)) and so vaccines are available for use. However the only way we will definitely know if biological weapons are an agent of mass destruction if they are ever used to their full potential. ...read more.