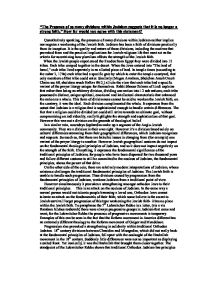 The Presence of so many divisions within Judaism suggests that it is no longer a strong faith, Discuss

"The Presence of so many divisions within Judaism suggests that it is no longer a strong faith." How far would you agree with this statement? Quantitatively speaking, the presence of many divisions within Judaism neither implies nor negates a weakening of the Jewish faith. Judaism has been a faith of divisions practically from its inception. It is the quality and nature of these divisions, including the motives that provoked them and the practical implications for Jewish religious life that must act as the criteria for ascertaining how pluralism affects the strength of the Jewish faith. When the Jewish people experienced the Exodus from Egypt they were divided into 12 tribes. Each tribe camped together in the desert. When the Jews entered into "The land of Israel," each tribe lived separately in an allotted piece of land. In temple times (according to the zohar 3, 170a) each tribe had a specific gate by which to enter the temple courtyard, that only members of that tribe could enter. Similarly (Magen Avraham, Shulchan Aruch Orach Chaim sec 68, shulchan aruch HaRav 86:2,) all cite the view that each tribe had a specific variant of the prayer liturgy unique for themselves. ...read more.

Progression also provoked a strengthening in solidarity within traditional Orthodox Judaism. 18th century divisions between Chasidim and Misngadim, which did not really hack at the fundamental principles of Judaism, fell apart with the onslaught of the Haskallah movement in the 18th century. Suddenly little differences were not so important as displaying a united front. Yet ironically, it was the Haskallah that brought them closer together. The standpoint of the Lubavitcher Rebbe shows that traditional Orthodox Judaism has principles that cannot be reckoned with. Yet at the same time it limits the faith to not being able to handle fundamental theological progression. Of course from a progressive perspective, their existence strengthens the Jewish faith. In the preamble to a statement of principles for Reform Judaism adopted at the 1999 Pittsburgh Convention, "the great contribution of Reform Judaism is that it has enabled the Jewish people to introduce innovation while preserving tradition..." they believe themselves to be preserving tradition, which they see as the nucleus of Judaism. It could also be argued that progressive Judaism strengthens the Jewish faith by creating a dialectic playing field. Progressive Judaism will prevent Orthodox traditional Judaism drifting too far to the right. ...read more.

The leftist trend of the United Synagogue, provoked the formation of Mahzikei Ha-Dat. They decided that the United synagogue was too English. They had their own synagogue and their own Shochtim. This turned into the Union of Orthodox Hebrew Congregations. No longer was the united synagogue now the right as there was something much more right than it. The division caused tension, and showed the inability of the United synagogue to satisfy all their customers. The same applies to the formation of the Liberal synagogue. They felt Adler was not going far enough. The fact that there are so many movements across the spectrum showed that the United Synagogue was no longer a strong movement. It showed the flaws in Anglo Jewry, namely that it was motivated by a desire to fit in with English society, which stems from an inferiority complex regarding Judaism. Montefiore himself stated, "I am an Englishman of the Jewish persuasion." Rather than the divisions here weakening the faith, the weakening of the faith, caused divisions. In conclusion within Anglo-Jewry the presence of many divisions shows how weak the Jewish faith in England was. Generally speaking divisions in Judaism only connote weakness when they interfere with the nucleus of Judaism. Even then divisions provoke a strengthening of the faith as a response to the threat of destruction. ...read more.