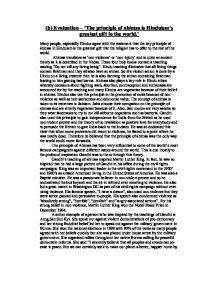 (b) Evaluation - 'The principle of ahimsa is Hinduism's greatest gift to the world.' Many people, especially Hindus agree with the statement that the key principle of ahimsa in Hinduism is the greatest gift that the religion has to offer to the rest of the world. Ahimsa translates as 'non-violence' or 'non-injury' and is quite an ancient theory as it is described in the Vedas. These four holy books contain a teaching reading "Do not kill any living being". Hindu teaching illustrates that all living things contain Brahman and they all also have an atman. So if a violent action is done by a Hindu on a living creature then he is also harming the atman containing Brahman leading to him gaining bad karma. Ahimsa also plays a key role in Hindu ethics whereby decisions about fighting wars, abortion, contraception and euthanasia are accounted for by the teaching and many Hindus are vegetarian because of their belief in ahimsa. Hindus also use this principle in the protection of cows because of non -violence as well as heir sacredness and economic value. The concept of ahimsa is taken to its extremes in Jainism. Jains choose their occupation on the principle of ahimsa and are strictly vegetarian because of it. Also, Jain monks are very ascetic so they wear facemasks to try to not kill airborne organisms such as bacteria. ...read more.

She organised rallies throughout her native Burma calling for peaceful democratic reforms. She said "I sincerely believe that all peoples and creeds can co-exist is peace. But we can certainly seek to make our planet a better, happier home by all of us constructing the heavenly bodes of love in our hearts". Her work was regarded as very non-violent so in 1991, she was awarded with the Nobel Peace Prize. Oscar Romeo of South America who was a Roman Catholic Bishop who believed in the liberation theology where the poor weren't too deprived therefore the rich weren't too rich and he used the principle of non-violence demonstrated another example of the inspiration of Gandhi's teachings of non-violence. Green Peace is an example of environmental activists who also follow the teaching of non-violence. However, many people, as well as Hindus, disagree with the statement that the key principle of ahimsa in Hinduism is the greatest gift that the religion has to offer. There are many more key teachings in Hinduism that can be argued to be more important in Hinduism. Karma is the law of cause and effect and means 'action', so actions have consequences. This involves the theory of reincarnation so selfish and evil actions will make the next life full of suffering whereas unselfish and good actions will make the next life full of happiness and fortune. ...read more.

Krishna tells him that it his duty (dharma) as a warrior to fight the battle to try to kill his opponents but the must not take pleasure in doing so. Krishna also says that the atman is real so it will survive because the bodies are just an illusion and by fulfilling his dharma, Arjuna is creating good karma. Another example where the principle of ahimsa would have not worked was eradicating Nazism in Germany because Hitler was an aggressive opponent and he would not give up his beliefs without surrendering through the form of violent actions. As a Hindu, I believe that the principle of ahimsa is the greatest gift to the world from Hinduism because I believe it is part of other key beliefs. This involves fulfilling one's dharma (duty) that can be done in many different ways apart from non-violence and gaining positive karma can also be done in other ways apart from sticking to the principle of ahimsa. I also believe that vegetarianism has been adopted all over the world on a larger scale than the principle of non-violence as many people are vegetarian due to health reasons, where vegetarianism stems from Hinduism in particular. Also, I believe that Indian culture is a big influence in western society because many westerners are converting to Hinduism and many westerners enjoy the culture e.g. eating Indian food at Indian restaurants. ...read more.