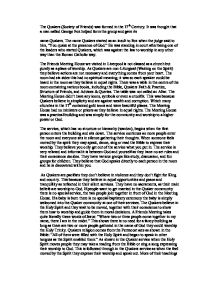 The Quakers (Society of Friends) was formed in the 17th Century. It was thought that a man called George Fox helped form the group and gave its name Quakers.

The Quakers (Society of Friends) was formed in the 17th Century. It was thought that a man called George Fox helped form the group and gave its name Quakers. The name Quakers started as an insult to Fox when the judge said to him, "You quake at the presence of God." He was standing in court after being one of the leaders who started Quakers, which was against the law to worship in any other way than the Roman Catholic way. The Friends Meeting House we visited in Liverpool is not classed as a church but purely as a place of worship. As Quakers are non-Liturgical (Waiting on the Spirit) they believe actions are not necessary and everything comes from your heart. ...read more.

The service continues as more people enter the room and everyone sits in silence gathering their thoughts. When someone feels moved by the spirit they may speak, dance, sing or read the Bible to express their worship. They believe you only get out of the service what you put in. The service is very relaxed and informal it is between God and yourself as they have no set rules and their conscience decides. They have various groups like study, discussion, and fun groups for children. They believe that God speaks directly to each person in the room and he is discovered within you. As Quakers are pacifists they don't believe in violence and they don't fight for King and country. ...read more.

This shows there is no need for a fancy building as long as there are two or more people gathered in the name of God they could worship the Holy Trinity. Quakers religion comes from the Pentecost acts as shown in the Bible: "All of them were filled with the Holy Spirit and began to speak in other tongues as the Spirit enabled them." As shown in the Quaker service when the Holy Spirit moves people they may take a reading from the Bible or sing a song expressing their worship to God. This is followed through in the Quakers service as when the feel moved by the Spirit they express their worship and speak out. More of their teachings come from the Spiritual gifts "and no one can say Jesus is Lord, except by the Holy Spirit." This is shown in their service, as they do not refer to God but a higher power. ...read more.