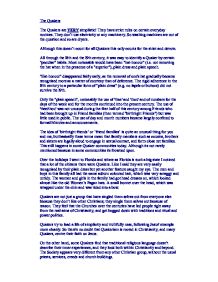 The Quakers The Quakers are VERY simplistic! They have strict rules on certain everyday routines. They don't use electricity or any machinery. So washing machines are out of the question and so are dryers. Although this doesn't count for all Quakers this only counts for the strict and devote. All through the l8th and the l9th century, it was easy to identify a Quaker by certain "peculiar" habits. Most noticeable would have been "hat-honour" (i.e. not removing the hat when in the presence of a "superior"), plain dress and plain speech. "Hat-honour" disappeared fairly early, as the removal of one's hat gradually became recognised more as a matter of courtesy than of deference. ...read more.

but was little used in public. The use of day and month numbers became largely confined to formal Minutes and announcements. The idea of 'birthright friends' or 'friend families' is quite an unusual thing for you and me, but basically these terms mean that family members such as cousins, brothers and sisters are legally aloud to engage in sexual contact, and form close net families. This still happens in some Quaker communities today. Although its not rarely mentioned because in some communities its frowned upon. Over the holidays I went to Florida and where as Florida is such a big state I noticed that a lot of the citizens there were Quakers. ...read more.

Quakers are not just a group that have singled them selves out from everyone else because they don't like other Christians; they single them selves out because of reason. They feel that the Churches over the centuries have led people right away from the real aims of Christianity, and get bogged down with traditions and ritual and power politics. Quakers try to lead a life of simplicity and truthfully ness, following Jesus' example more closely. So there's no doubt that Quakerism is rooted in Christianity, and many Quakers, centre their faith on Jesus. On the other hand, some Quakers find that traditional religious language doesn't describe their inner experiences, and they look both within Christianity and beyond. The Society appears very different from any other Christian group, without the usual priests, services, creeds and church buildings. ...read more.