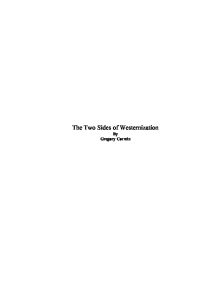 The question is, what is happiness? And is technology being exported to benefit the poorer nations, or only to profit the exporters?Otto Ullrich in his essay &quot;Technology&quot; considers these questions, taking as a starting point the end

The Two Sides of Westernization By Gregory Corwin The pursuit of happiness, enshrined in the Declaration of Independence, has motivated American policy since the birth of the nation. But for years, in order to pursue the American dream, one had to live in America, or in Europe. Now, we in the industrial West have come to believe that happiness can be exported. In the global village everyone can partake of the benefits of technology, which is the road to happiness. The question is, what is happiness? And is technology being exported to benefit the poorer nations, or only to profit the exporters? Otto Ullrich in his essay "Technology" considers these questions, taking as a starting point the end of World War II. In the aftermath of that war, many leaders, including President Harry S. Truman, believed that prosperity could be achieved through greater production, and that foreign exploitation must not be a part of industrial progress. "...The old imperialism- exploitation for foreign profit - has no place in our plans...," Truman said. Today, however, the Western world appears to be exploiting developing countries for its own profit, rather than for the good of the developing countries. ...read more.

Besides, there is the fact that if the US or any other industrialized country ceased to sell weapons to the developing countries, a different industrial country would do it. Countries compete for arms markets. That competition would continue, no matter what. Next, Ullrich questions whether the forces of production will lead to prosperity. He refers to Francis Bacon, the British philosopher, who stated that "Through the production of material goods, the necessary conditions for the good life were supposed to have been created..." (1601). As Westerners, we believe that material gain with little to no effort is the road to prosperity and happiness. But instead of finding prosperity, new dilemmas have emerged as we have made material gains. Today, people don't have any appreciation for what they have; they always want more, or they want what their neighbor has. And they end up in an endless spiral of needs that Ullrich refers to as homo industriae. Material commodities don't make us any happier. Human happiness is reached by other means, such as through ties with people and a building a sense of self-esteem. I strongly agree with Ullrich's views on this matter. Most people my age today are bombarded by superficial images that distort our values in life. ...read more.

They begin to conform to Western lifestyles. This conversion prevents newer generations from learning about their customs and traditions, including their own languages. If this process continues then everyone will end up being the same. Another problem that occurs with Westernization is rapid urbanization. As small farms become obsolete because of the emergence of large international agri-businesses, farmers tend to move to urban areas, and because there is not enough room or jobs for everyone in the city, many people cannot find jobs and become unemployed and homeless. When "underdeveloped" areas of the world decide to become Westernized, they need a lot of money for this process. Most of the time, they don't have enough money, and so they end up borrowing a lot from rich nations and international institutions like the World Bank, that charge them high interest rates. Often they have to pay so much interest that they cannot use the money they have for development. Technology has its good side, but it also has its bad effects. Most of all, since it is developed in industrialized cultures, it cannot be transferred easily into developing cultures. Local cultures must be respected. In addition, technology should not be exported solely for profit. It should recognize local values and customs, at the same time that it is trying to raise the living standards of the local population. ...read more.