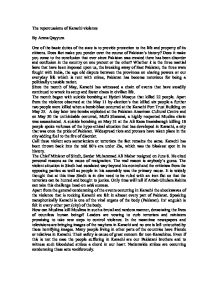 The repercussions of Karachi violence

The repercussions of Karachi violence By Amna Qayyum One of the basic duties of the state is to provide protection to the life and property of its citizens. Does fact make you ponder over the course of Pakistan's history? Does it make you come to the conclusion that ever since Pakistan was created there has been disorder and confusion in the country on one pretext or the other? Whether it is the three martial laws that have been imposed upon us, the breaking away of East Pakistan, the three wars fought with India, the age old dispute between the provinces on sharing powers or our everyday life which is rent with crime, Pakistan has become notorious for being a politically unstable nation. Since the month of May, Karachi has witnessed a chain of events that have steadily continued to wreck its setup and foster chaos in civilian life. ...read more.

The Chief Minister of Sindh, Sardar Muhammad Ali Mahar resigned on June 8. He cited personal reasons as the cause of resignation. The real reason is anybody's guess. The violent situation in Sindh had escalated way beyond his control and the criticism from the opposing parties as well as people in his assembly was the primary cause. It is widely thought that at this time Sindh is in dire need to be ruled with an iron fist so that the terrorists can be hunted and bought to justice. Only time will tell if Arbab Ghulam Rahim can take this challenge head-on with success. Apart from the general condemning of the events occurring in Karachi the shockwaves of the violence that is rocking Karachi are felt in almost every part of Pakistan. Speaking metaphorically Karachi is one of the vital organs of the body (Pakistan). ...read more.

This is hazardous to the development of the country. If the ruling parties are with daggers drawn at each other how can the situation possibly be bought under control? This hostility has seeped into the political setup of the country and can damage it irreversibly. Karachi is a port city and the Keamari Port is the largest one in Pakistan. It facilitates a large portion of the imports/exports of our country. The disorder in Karachi has led to the deceleration of trade and industries in the northern areas are suffering because of lack of trade. Karachi is also the commercial hub of the country and numerous industries are located here. The anarchy in the city has caused industrial productivity to decline and this is having a destabilizing affect on all sectors of the economy. Moreover the violence in Karachi has led to wide scale sectarianism in all parts of the country. The hunt for the elusive terrorists is still on and only time can tell if Karachi will live to see the day when it is free from ethnic strife. ...read more.