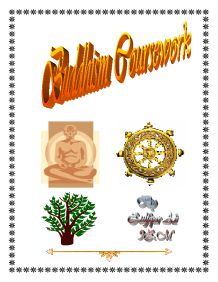 The sacred book of Buddhism is called the Tipitaka.

The sacred book of Buddhism is called the Tipitaka. It is written in an ancient Indian language called Pali, the religious language Theravada which is very close to the language that the Buddha spoke himself, having a simpler structure than the Sanskrit of the Hindu texts. The Tipitaka is a very large book. The English translation of it takes up nearly forty volumes. The word Tipitaka is made up of two words, ti means 'three' and pitaka means 'baskets'. The first part of the name refers to the fact that the Buddhist scriptures consist of three baskets. The first basket, called the Sutta Pitaka, contains all the Buddha's discourses as well as some by his enlightened disciples. The type of material in the Sutta Pitaka is very diverse which allows it to communicate the truths that the Buddha taught to all different types of people. Many of the Buddha's discourses are in the style of sermons while others are in the style of dialogues. Other parts like the Dhammapada present the Buddha's teachings through poetry. The Dhammapada is one of the smallest works in the first sections of the Tipitaka. The name could be translated as 'The Way of Truth' or 'Verses of Truth'. It has of 423 verses, some pithy, some profound, some containing appealing similes, all spoken by the Buddha. Dhammapada is the most popular piece of Buddhist literature. ...read more.

The lions symbolize the Buddha's first teaching -the Four Noble Truths. Until the 12th century, Sarnath continued to be a major site for Buddhist pilgrimages. Many great masters, members of royal families, and devoted men and women came to this area to worship and pay their respects, benefiting from their efforts. 4. Bamboo Vihara Where the Buddha often resided; it was called Kalantaka or Kalanta veluvana. According to Hiouen-Thsang's account, Kalanta was a rich merchant, who had at first given his garden to the Brahmans, but after hearing the sublime Law regretted his gift, and took it away from them. He caused a massive house to be built there, and offered it to the Buddha. It was there that the Buddha converted several of his most distinguished disciples - Sariputra, Moggallana and katyayana; it was also at this house that the first Council was held after his death. 5. Vultures' Peak Mountain (Gridharakuta Parvata) Rajgir, Vulture's Peak Mountain, where Buddha turned the second Wheel of Dharma, bringing forth the Prajnaparamita teachings. The Buddha found pleasure in wandering about this mountain, so rich in grand and beautiful scenery shade by magnificent trees, and fresh with sparkling springs. It was there that, surrounded by his disciples, he taught the Lotus of the good Law, the Mahapradjna-Paramita Sutra, and many other Sutras. 7. Bodh-gaya One of the four sacred Buddhists sites, ninety kilometers (55 miles) ...read more.

All of these are believed to have happened on the same day of the year. Temples are decorated, lanterns are made, and the Bodhi tree is often decorated with oil lamps. People also send Wesak cards to each other. The Burmese believe that this is the day all Buddha's attain enlightenment. In Japan, birth, enlightenment and death are all celebrated on three separate days. Asala: Asala is usually in July and it marks the preaching of the Buddha's first sermon in the deer-park, "The Turning of the Wheel Law." It also the beginning of the 'rains' retreat. It's when monks preach sermons recalling the first preaching. Buddhism is the only religion that does not believe in a God. It started in India about 2500 years ago. A man named Siddartha Gautama lived in a palace and had all the things he wanted. A wise man predicted that he will be a grate ruler either a religious leader or a king. He got married. One day some girls who had been provided for Siddartha began telling him things about the outside world. Siddartha wanted to go out because he hadn't ever gone outside the palace. His father tried his best to clean up the streets. But when Siddartha did go out for the first time he saw a holy man, a ill man and a old man. After seeing this he wanted to know the true meaning of life and became religious and left the palace to seek answers. He sat under a Bodhi tree when he was enlightened. ...read more.