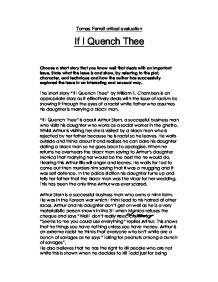 The short story &quot;If I Quench Thee&quot; by William E. Chambers is an appropriate story as it effectively deals with the issue of racism by showing it through the eyes of a racist white father who assumes his daughter is marrying a black man.

Tomas Farrell critical evaluation If I Quench Thee Choose a short story that you know well that deals with an important issue. State what the issue is and show, by referring to the plot, character, and technique and how the author has successfully explored the issue in an interesting and unusual way. The short story "If I Quench Thee" by William E. Chambers is an appropriate story as it effectively deals with the issue of racism by showing it through the eyes of a racist white father who assumes his daughter is marrying a black man. "If I Quench Thee" is about Arthur Stern, a successful business man who visits his daughter who works as a social worker in the ghetto. Whilst Arthur is visiting her she is visited by a black man who is rejected by her father because he is racist so he leaves. He waits outside and thinks about it and realises he can bare his daughter dating a black man so he goes back to apologise. ...read more.

He also believes that he has the right to kill people who are not white this is shown when he decides to kill Todd just for being black. Arthur also assumes that all white people think the same way as him as he assumes that the police officers would see a typical white male a bit roughed up and a black man lying dead and just think that it was an attack on the white man. The relationship between Monica and her father shows a contrast between their beliefs about the poor and other races. This is shown when her father appears and offers her a sum of money as a gift as he thinks she's living in poverty. She however, disagrees with his view and thinks all she needs is a job and a home to live happily. Her father's reaction to her response is an angry one and he believes she is wasting her life helping "savages". The theme of "If I Quench Thee" is racial hatred and the author explores this issue. ...read more.

"For the first time in his life, Arthur Stern knew fear." My personal response to this story was that I was shocked and disgusted that people could be so racist and how people could think that they have a right to kill others just because they aren't the same skin colour as them. It made me think about how sick and twisted people can be and how that some people can hate something so much that they would take it too such extreme lengths as to things such as murder. I personally think racism is wrong because people of a different race aren't any different or inferior to white people like Arthur Stern thought. To conclude, I think that the author has expressed the view on racism in an effective way relating to the plot, characters and techniques used. Even though Stern was such an "evil" man, he can still feel regret for such a terrible act after realising that what he has done is actually wrong. This makes me believe that human society can improve on its views of racism. ...read more.